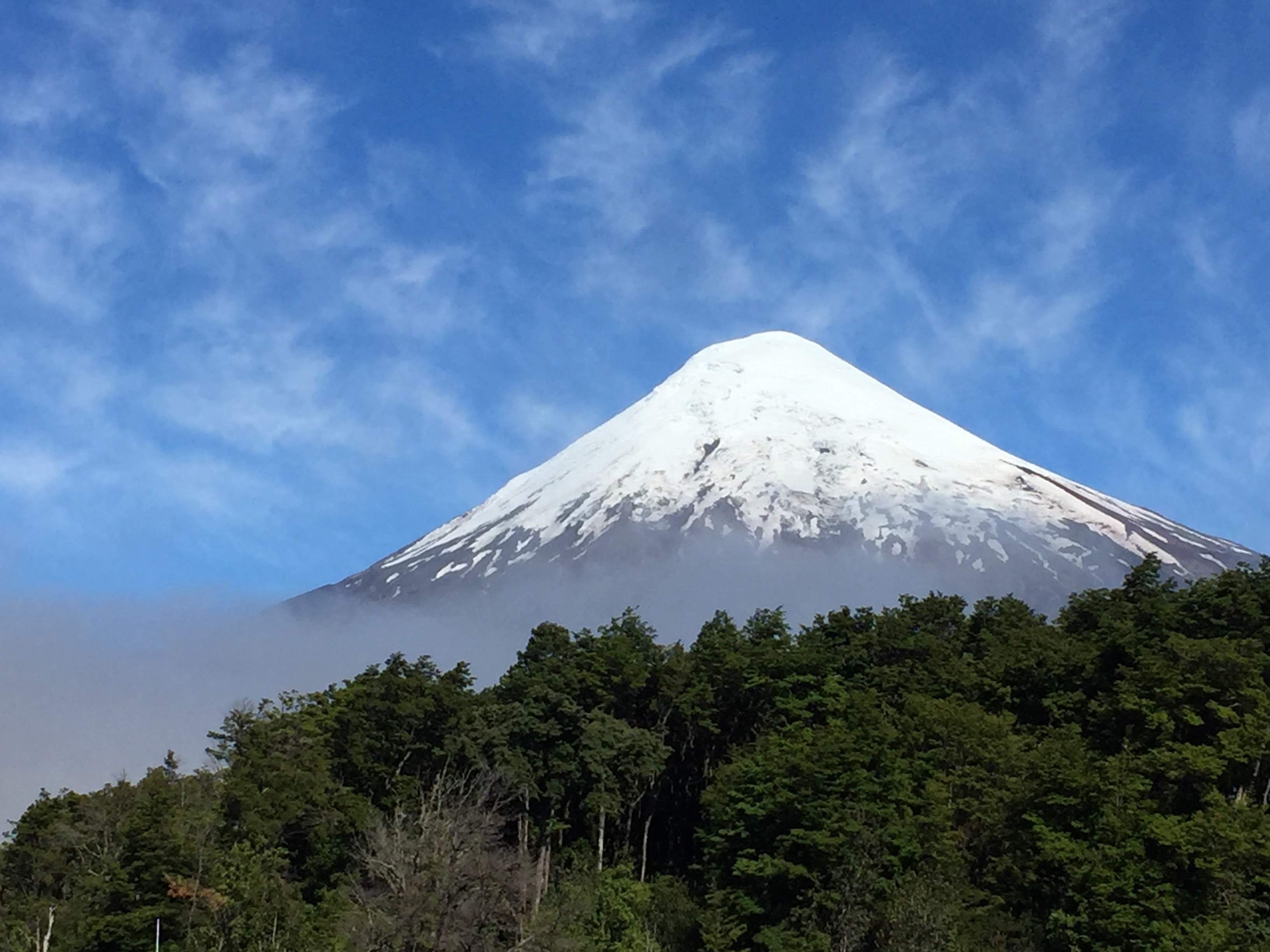 I love to drive. Unfortunately, the geography of Chile doesn’t lend itself easily to driving. If attempted, the drive from Santiago to Puerto Varas would have been over 10 hours and 1000 kilometers on some sketchy roads. It’s the kind of time not available on an 8-day itinerary.  It’s an hour and a forty-five minute flight from Santiago to Puerto Montt, and then another 30 minute drive from the airport in Puerto Montt to Puerto Varas. Much more preferable than the drive, although a lot less adventurous. The flight was on a Airbus A321 on LATAM Airlines, basically the first leg of three to get us to Puerto Montt for a two day stay,  and then from Puerto Montt to Punta Arenas for the part of our trip promising the most adventure and discovery in the Chilean Patagonia north of Puerto Natales.

Getting the rental car at the Puerto Montt airport was very straightforward. The drive from the Puerto Montt airport to our hotel in Puerto Varas was a meandering trek through sparsely populated Lakes District countryside on what continued to be a lovely sunny day, but a bit cooler due to being farther south. Puerto Varas is focused on tourism with hotels and restaurants all along the lakefront. This was evident as we entered the city by car from the airport, and made our way toward our hotel driving through the residential parts of the city.

Puerto Varas reminds me of a lesser frequented Florida beach town – it’s touristy but not overwhelmingly so. On arrival to the Hotel Cabana del Lago, we checked in, and were pleased to discover that all the rooms were facing Lake Llanquihue, and all the rooms and cottages had panoramic views of the volcanoes across the lake. We had a cottage with a kitchenette, and a living room area. The main room in particular had lots of glass to take in the panoramic scenery.  Stepping onto the balcony was like stepping into the panoramic views.  it was just gorgeous, like the kind of scenery that can’t be truly represented with as many photos as one takes, and as carefully selected as one tries, it just doesn’t convey the same feeling as being there. The hotel was a multi building complex with plenty of amenities, including spa, workout facilities, swimming pool, restaurants, in short everything you expect from a high-end hotel. The most welcoming facilities for me were the glassed in informal dining/bar area, and the expansive terrace with panoramic views across the the lake toward the volcanoes.

With the views so beautiful and enchanting right in front of me, I wanted to see the rest of it from a more intimate vantage.  So we hopped into our rental vehicle, a little Ford four-wheel-drive SUV not available in the States.  All wheel drive wasn’t a necessity, it’s what they offered at the airport rental counter. We took a tour around Lake Llanquihue, completely circumnavigating in a leisurely day trip excursion from the hotel. Along the way we stopped at several points to take in the scenery and bring back memories.

The trip around  Lake Llanquihue basically broke down to four parts.  For part one we stopped at the Parque Nacional Perez Rosales Laguna Verde. Certainly not a highlight, but the first stop in the circuit. For part two we drove to the Saltos Rio Petrohue section of the park, an area where we had fast-moving rapids, surrounded by picturesque scenery. Stop number three we arrived at a place where we could park the car and hike along a sandy path to the mouth of the Petrohue River at the junction with Lago Todos los Santos for some very cool photos of Volcan Osorno in the distance. This was a bit of a bittersweet experience because while the views were amazing, we had to contend with biting horseflies menacing us whenever we stood still to take a photo. You know you’re off the beaten path when there’s not a soul in sight and you’re horsefly chow. The final leg of the round-the-lake trek was the drive up Volcan Osorno Centro de Ski.  There were very few people wandering about as it was summer, and the main use of the facility was for skiing.  There was a self-serve zipline facility from near the top of the volcano.  But the most interesting part was wandering about, taking it all in, and returning with some hard to describe photos.

The town of Puerto Varas is basically the interior of the Lake Llanquihue facing resort complex of hotels and amenities. The interior of the town neither had a lot of pedestrian traffic nor a lot of automobile traffic. There was no need for an automobile unless leaving town as everything was easily accessible on foot. The weather was lovely mid-70s blue skies –  couldn’t ask for better walking weather.  With the low humidity, we had the sensation of being in the mountains with a little nip to the air, but in reality we were just a couple hundred feet above sea level.

We kept seeking out “local fare” with a bent towards seafood.  We asked for restaurant recommendations from the concierge.  I’m not sure I got the best of recommendations as I believe the staff was put off by us not dining at the hotel. My hunch is that the hotels do have the best fare in Puerto Varas as strongly hinted by the meal we had at Hotel Cabana del Lago.  The food at the restaurants we patronized to this point on the trip was good, but didn’t rise to any loftier level beyond good.

This place was tucked away, needing a walk through little garden to enter the restaurant.  It was a mainstream restaurant catering mostly to tourists. This was one of the very few restaurants that had an English speaking waiter.  More seafood, and it was good, but of note was the Sea Urchin roe – Uni in Sushi Speak.  I couldn’t believe my eyes when I found it on the menu.  I asked the waiter how it was prepared, expecting to hear something bizarre I hadn’t come across before.  He offered to bring me a sample to avoid the effort of a difficult explanation.  The sample turned out to be more generous than what would pass for a $20 serving at a good US Sushi Bar. It was great. Absolutely fresh. Naturally I ordered it as an appetizer, and it turned out to be more Uni than I’d had before – like accumulated ever.  I have to emphasize how fresh this was, because this sort of thing is to be avoided if anything other than very fresh.  People that love Uni will know what I’m talking about.

This place was featured in one of Anthony Bourdain’s No Reservations episodes, and there’s a photo of him with the owner proudly on display.  It’s a hole-in-the-wall mom and pop run seafood restaurant featuring large seafood portions, hence gordito in the name. It was good, and there was plenty of it.

This was our final meal in Puerto Varas before heading to the airport in Puerto Montt for our flight to Puerto Natales.  This was by far the best meal in Puerto Varas, which is why I suspect the better fare is at the hotels in this town.  The food was elegantly prepared and served. Everything was fresh, and the service was impeccable.  The view can’t be beat either.  Trying to go local for food, which is one of the things I like to do to accomplish immersion, is not what I would advise here. The local stuff was “meh”, and the hotel offering was superior.

In closing, Puerto Varas was the perfect stop off before getting to the epic portion of the Chilean trip – Patagonia and Torres del Paine National Park. There was enough to do to keep us well engaged for a couple of days. The circumnavigation of Lago Llanquihue, and the visit to Volcan Osorno was just as inspiring as it was beautiful, and memorable. And the little walkabout the town of Puerto Varas away from the touristy bits also was interesting. From a food perspective, The Uni experience in Puerto Varas will stand out as a memory for a long time.  All my favorite Sushi places will have a new mark to hit for Uni – but never to be attained for quantity, even if they hit the mark for quality.  The Lakes District, if not Puerto Varas specifically, would be a very interesting place to come back to for further exploration. There are lakes scattered all over the map leaving plenty of opportunity for exploration, and justifying why the rental car companies offer all wheel drive vehicles.  Surely there must be places where that feature would be put to good use.