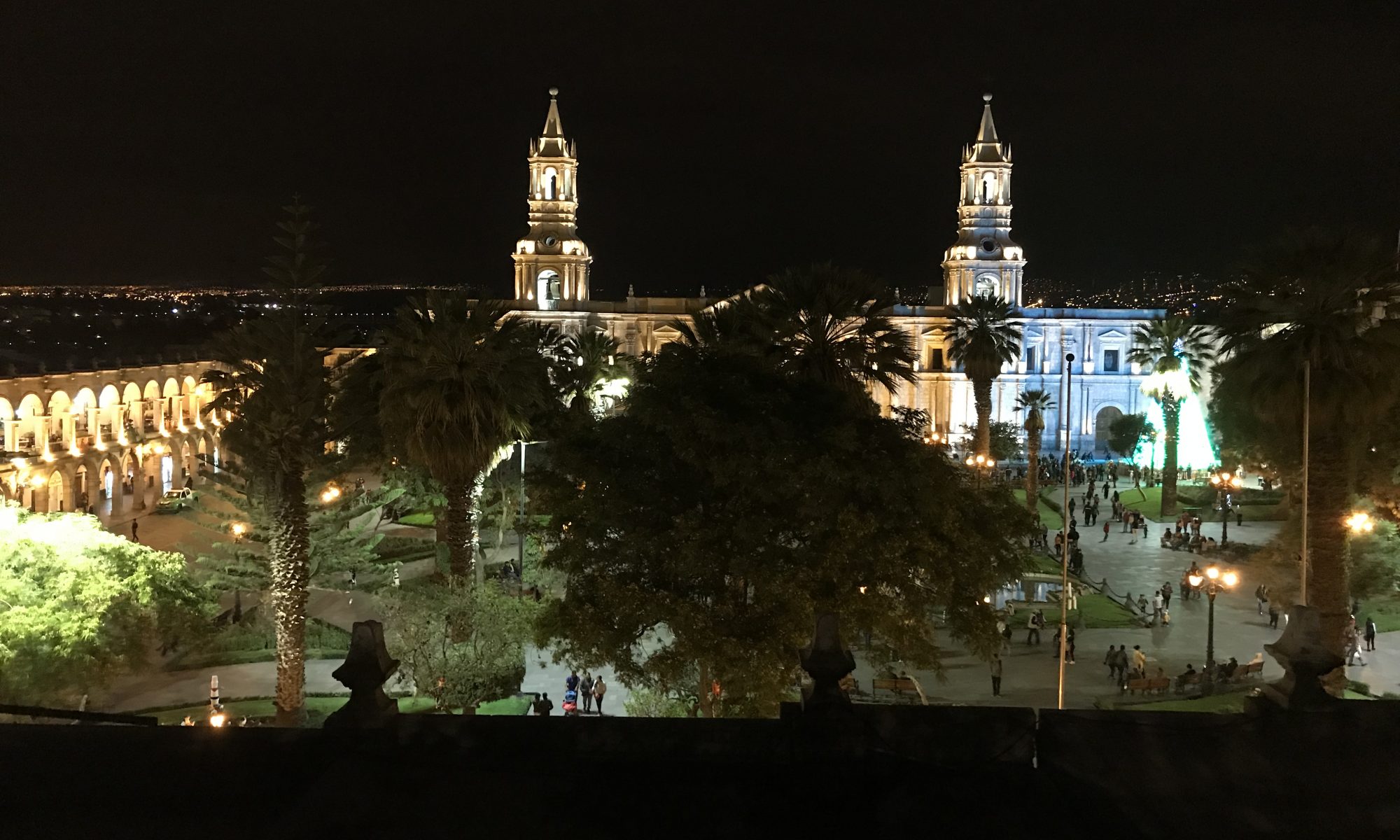 Immersive Travel Arequipa is the 3rd destination of three in the Peru itinerary. The details related to planning for this destination and the others on the Peru circuit are described in The Peru Travel Planning post.

Ollantaytambo was all about Inca history, and tradition – especially because it was the gateway to Machu Picchu. Cusco was steeped in Inca history and tradition as well. Most of the old city center was built on the foundations of Inca construction, and there was a statue of Pachacuti Inca in the center of the Plaza de Armas in Cusco. Arequipa was different. There were no Inca ruins in Arequipa, and little history specific to the Inca as well. Arequipa was mostly about Spanish colonial heritage, and the evolution of the inherited Spanish traditions to the modern era.

Arequipa with one million residents is the second largest city in Peru behind the bustling capital of Lima. It’s is called the “White City” because much of its historic center was built from the local volcanic rock called sillar which contains a high level of silica, imparting the stone’s color. Arequipa is surrounded by three volcanoes which are prominently visible on a clear day. The tallest of the three is Chachani at just under 20,000 feet (6,075 meters), followed by still-active El Misti at 19,000 feet (5825 meters), and Pichu Pichu at 18,600 feet (5,664 meters). The towering snow capped volcanoes give the White City a completely different look and feel as compared to Cusco.

Arequipa suffered a massive earthquake in 1868 which was estimated to have been an 11 on the Richter Scale. The earthquake decimated and leveled the city, reducing most buildings to rubble. The city was rebuilt from the ground up using the building material salvaged from the rubble of the destroyed buildings. Arequipa looks like a mid-19th century Spanish colonial city, because it was essentially rebuilt in the 1870s. This was another noteworthy contrast to Cusco.

It was a fifty minute flight from Cusco to Arequipa to start the last leg of my ten days winter break in Peru. The provincial Arequipa airport was easily navigated at the end of the domestic flight. We were in a taxi, on our way to our centrally located boutique hotel on the Plaza de Armas within five minutes of landing. The 30 soles (under $USD 10) fare to the center of town was very reasonable.

The drive from the airport to the center of the old town exposed the same issues in Arequipa which I earlier observed on the outskirts of Cusco. The periphery of the city was disorganized, unkempt, in various states of disrepair, and hinted that poverty should be relegated to this side of town. It was an incredible contrast as we entered the old part of town, which was clean, as if proudly groomed to be on display. The center was both organized and orderly, with municipal police forces tactically stationed, and on patrol.

We arrived early to our boutique hotel on the Plaza de Armas, around 09:00 AM. The fifteen room hotel faced the Arequipa Cathedral across the Plaza. Hotel Katari had a helpful, knowledgeable, English speaking front desk person, and a bellman on duty to help with luggage. The hotel had its fifteen rooms distributed across three floors above the lobby/reception area. The roof of the building served as the hotel restaurant, with a gorgeous view across the plaza to the Cathedral, and beyond. On a clear day, stunning views of the three volcanoes surrounding the city of Arequipa were to be had.

The hotel room did have some nice views across the Plaza de Armas to the Arequipa Cathedral, with the volcanoes is the background.

In general, Peru has some infrastructure issues that all hotels, and apartments share. Most notably, the quality of the water (undrinkable), and the highly variable water pressure. While the tap water at the hotel remained undrinkable, they did provide free daily bottled water. And the annoying, highly variable, violently sputtering water pressure issue was resolved. We had normal showers, with good water temperature and pressure. It’s worth a mention because it was the first place in Peru we had this experience.

The heart of the city, the plaza, is quintessential Spanish colonial architecture, with impressive colonades and balconies lining three sides sides of the plaza, and the colossal Arequipa Cathedral with its soaring twin towers at its center. The Plaza is abuzz with local activity, both day and night.

The pre-colonial serpentine street layout was something our local guide proudly showcased.

The homes of colonial dignitaries were designed to have three courtyards. The outermost was reserved for guests, the central courtyard was for family’s use, and the innermost was designated for the slaves.

The colonial homes in current good repair have been maintained and operated by private enterprise. For example, the Intercontinental Bank building, and various restaurants and shops. Colonial homes in the care of the Peruvian government were never kept as well,  eventually falling into disrepair.

This Jesuit church was fresco covered, but they were destroyed during the 1868 earthquake. The Church has one of three paintings depicting the last supper with cuy (guinea pig) on the table. The church exterior was a Mistizo Gothic design incorporating European elements as well as local Quechua traditions.

The impressive Arequipa Cathedral spans the entire width of the Plaza de Armas. Constructed from the same white, sillar volcanic rock as the rest of old city center, the cathedral appeals to the eye in the bright sunshine. Its towering spires have been toppled multiple times from past earthquakes, but were always rebuilt to its current state of perfection. It is the center piece to the plaza, and maybe the center of Arequipa itself.

While very touristy, this four hour tour went well beyond the city limits to some interesting sites in the area, stopping for exploration and photo opportunities. We had front row seats on the second level with an unobstructed panoramic view. Interestingly, my wife and I were the only English speakers on the bus-full of people. Everyone spoke Spanish.

An Arequipa suburb, home to little parks, and Spanish Colonial churches, and little a mirador of its own. This area felt like a gentler version of the Plaza de Armas in the center of town.

A panoramic view over farmlands along the Chili River. On a clear day the volcanos are in view. There’s a snack bar serving drinks and light fare, and a zip line for the adventurous.

A 360 degree panoramic view from this mirador in the Sachaca district of Arequipa, really not too far from the city center, as you can tell from the video.

This little stop on the bus tour catered to gringos and other tourists offering very domesticated horseback rides, or a visit to La Mansion del Fundador, a Spanish Colonial mansion from Conquistadore times, which was closed during our visit.

Colca Canyon is to Arequipa as Machu Picchu is to Cusco and Ollantaytambo. One can’t visit Arequipa without visiting the Colca Canyon. We had a driver and tour guide for a day, which started at 4 AM and ended with a drop off directly at the Arequipa Airport at 7 PM.

It was a three and a half hour drive through some of the most beautifully rugged countryside I’ve ever seen. We maxed out at an elevation of 16,010 feet as we crossed a high desert plateau and started our descent towards the Colca Canyon.

We stopped at a lodge close to the Mirador Cruz del Condor for breakfast. The tour company does this for their guests, and it’s not open to the public. The views here were spectacular with the clouds lifting.

This was supposed to be the highlight of the Colca Canyon visit. The clouds were so low, and the fog so thick that It looked like weren’t going to spot any condors. But as the morning grew toward noon, the condors came out in spectacular fashion. We got lucky here.

Simply spectacular rugged outdoor scenery emerged as we made our way back to Arequipa, with some stopovers.

The highlight of this village was its beautiful church and colorful locals.

This was our last stop en route back to Arequipa. Most people soak in the mineral waters of the local spa. But we elected to browse through the local market. It was amazing to see the variety of potatoes grown in Peru. The majority was for local consumption. There was also an interesting hike in the area, just outside of the village.

En Route Back to Arequipa

More staggering scenery and local wildlife. It was incredible to see the variety of wildlife so high up on the plateau. We were always between 12,000 and 16,000 feet of elevation.

We had an early flight out of Cusco, arriving at our Arequipa hotel by 09:00, which was too early to check in. We got a recommendation from the hotel for this restaurant for breakfast. My wife went basic with the Americano, but I went native. Who says grilled pork ribs aren’t for breakfast.

I wanted genuine local fare, and found this highly rated new restaurant on TripAdvisor. It’s was a very intimate, but grand, space with columns, high ceilings, and plenty of natural light pouring through a partial glass ceiling. The menu and the service were both upscale. I started with the grilled octopus, and had the sea bass for my main, while my wife tried the grilled alpaca. We finished with local ice cream and strawberries. It was a bit foo foo, but very good.

This was our hotel for three nights, and breakfast was included. The breakfast was served buffet style, with the usual type of fare one would expect, like eggs, bacon, sausage, charcuterie, yogurt, and so on. However, the views from the rooftop dining area were truly unexpected. Just spectacular. We just sat for an hour just admiring the panoramic eye candy after breakfast.

This Picanteria Tradicional was recommended to us by our walking tour guide. It was a fifteen minute taxi ride – 7 soles (just over $USD 2) to get to this traditional local restaurant. I was surprised they had English menus, but wasn’t surprised that no one spoke a word of English. Picantorias serve hearty local fare, and in great quantity. I ordered the local staples: stuffed peppers, grilled pork, potato cake, and the shrimp soup. Very basic, very good.

New Year’s Eve dinner was served on the hotel’s roof-top dining area. The menu included local wines and champagne, and a variety of local fare. The food and service were both good, but the views again took center stage with impressive night scenery of the plaza and the city.

Reflections on Arequipa. The White City was the highlight of our Peru itinerary. The historic city center was clean and beautiful. It was a pleasure walking around, and exploring this city. The restaurants were excellent, and the infrastructure was a step up from Cusco. The day trek to Colca Canyon was ruggedly beautiful. It was a very memorable experience navigating the great outdoors. The pinnacle of the experience was witnessing the flight of the great condors at the Mirador Cruz del Condor. I was so impressed by the combination of Arequipa and the Colca Canyon experience that I would rank above the Cusco/Machu Picchu experience, and that was memorable as well. 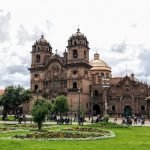 One Reply to “Immersive Travel Arequipa”