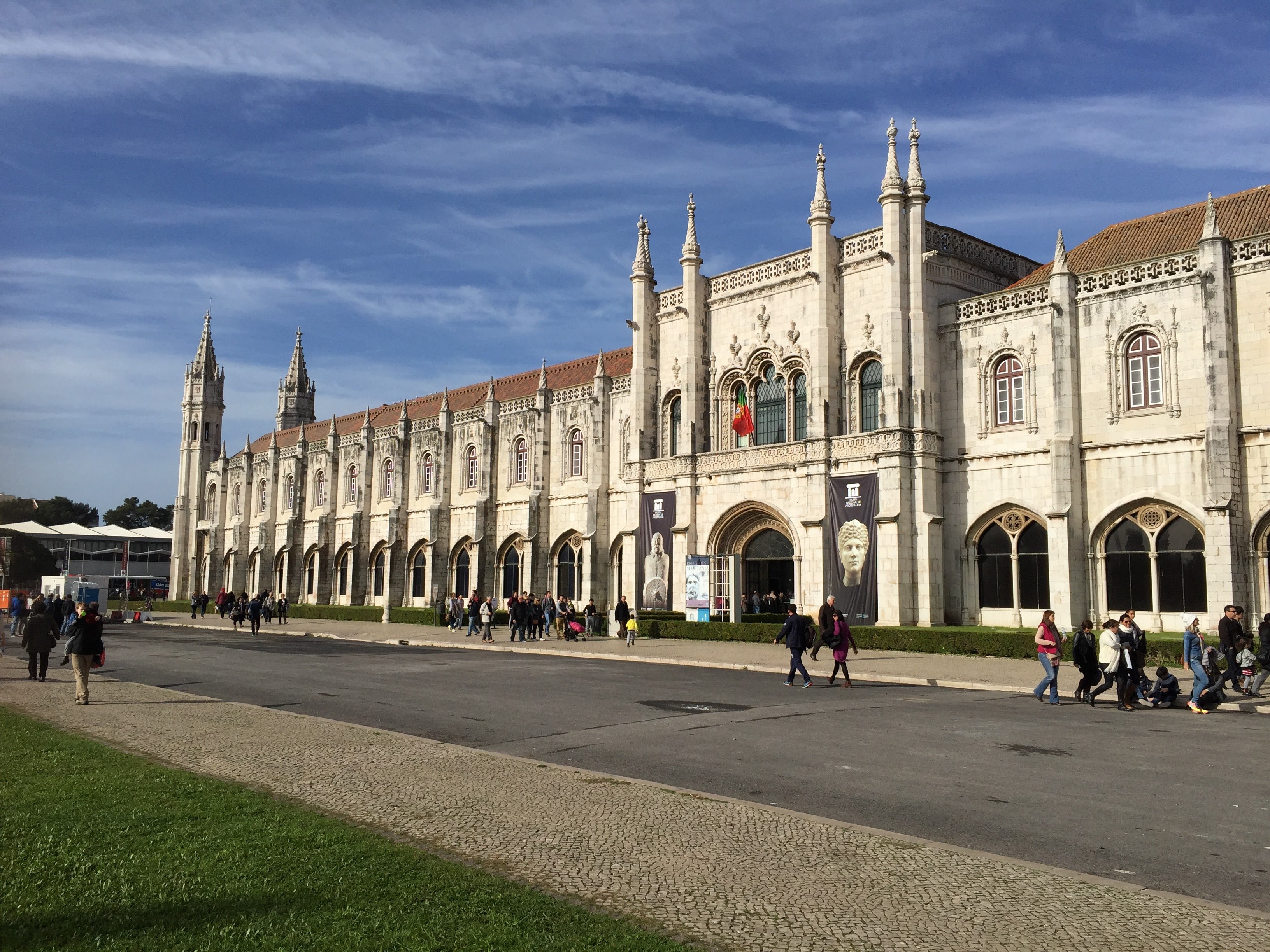 Lisbon must be visited on a first trip to Portugal. As the seat of Portugal’s maritime empire spanning from the 1500s through the 1800s, Lisbon is deeply steeped in history and tradition. Nestled on seven hills on the Tagus River, the city has some of most breathtaking views from these hillsides – called Miradouros. The first time visitor will be enchanted with all that Lisbon has to offer, especially the high quality, very affordable food scene. Lisbon is a seafood lovers delight, especially for anyone on a budget.

As the second stop on the Portugal itinerary, we arrived by train from Porto in just over three hours in the early afternoon on December 26. The train ride was uneventful, with the countryside whistling by as the train made steady progress towards Lisbon. We arrived at the Lisboa Rossio train station, relatively close to our apartment – just a five minute taxi ride away. In fact, it took longer to hail the taxi than it took to get to our destination.

The contrast between Porto, and Lisbon on arrival was both immediate and obvious. Porto was a fraction of the size of Lisbon, had an intimate feel to it, people seemed friendly and approachable, the pace of life was slower, and even the restaurants and cafes felt more familiar. Lisbon was a larger, more diversified city, definitely with a charm all its own, and more of everything than Porto – museums, parks, monuments, restaurants – waiting to be discovered. Lisbon felt a little more rough around the edges, perhaps a little more gritty than Porto. Different, yet charming.

I booked the Lisbon apartment through Homeaway, my go-to resource for high quality apartments in some of the best locations. This particular apartment was booked nine months in advance, and was in a residential neighborhood, with easy walking access to all of the interesting parts of town. It had wonderful views over the rooftops of the city from the back of the apartment. We had our own Miradouro right inside the apartment.

The apartment was spacious with over 1,000 square feet of interior space, which is relatively large by European standards for a single bedroom dwelling. It was fully equipped with a washer/dryer, WIFI, a bed that might have been a bit more comfortable, and a shower with ample hot water. Five nights in Lisbon were comfortably spent, with all that a traveling couple would need.  And the best – there was a true Miradouro just outside the apartment overlooking the city all the way to the water: The Miradouro of Our Lady of the Mount.

The photos below are some of the views we had from our lovely apartment, and the video is from the Miradouro of Our Lady of the Mount, just outside the apartment.

Continuing the leisurely pace we started in Porto, upon arrival in Lisbon we set out to discover the city and its neighborhoods. The first local point of interest we sought out was the port of Lisbon and its centrally located Praca do Comercio, or Commerce Square.

We eventually found our way to Costelo Sao Jorge while strolling through the twists and turns of the medieval streets of the Alfama. This neighborhood has been in existence for a thousand years, and people still sell fish from their door stoops – a throwback to medieval times.  The Costelo is the very top of the climb in the Alfama, and is one of the more impressive Mirodouros in Lisbon, with spectacular views.

We taxied to Almada to see the impressive statue of Christ, essentially an homage to the statue of Christ the Redeemer in Rio de Janeiro. Very impressive was the Ponte 25 de Abril, the enormous suspension bridge built by the same American company that built the San Francisco/Oakland Bay Bridge, and looks remarkably similar to the Golden Gate Bridge.

Still a bit off the beaten path of tourism, and something mostly the locals would see, we visited Estufa Fria, the botanical garden in the center of Parque Eduardo VII which was started in 1910.

We took a marvelous walk starting at Campo Santa Clara, and terminating in Praca do Imperio in Belem. We visited the National Pantheon at Campo Santa Clara, which included the final resting place of historical Portuguese figures, most notable among them was Vasco da Gama. It was at least a ten mile walk round trip on a beautifully blustery, sunny day in Lisbon at the end of December.

On our last day in Lisbon, we took tram 28, which stopped close to our apartment, to places unknown, simply following our sense of discovery. We found a wonderful 800 year old former monastery, turned into a brewery, then into a restaurant – see the food scene below.  We also found a Port wine tasting cafe with a huge variety of the good stuff. I tried a 40 year old vintage Port, which was a wonderful aperitif leading up to dinner.We spent our last full day in Lisbon simply discovering, and meandering.

Day Trip to Sintra and Cascais

With five nights in Lisbon, we were afforded the opportunity to get out of the city to explore interesting destinations nearby.  The Moorish designed Sintra National Palace, richly decorated in period tile is the major attraction for visitors near Sintra. The nearby Pena National Palace, perched on a hilltop, is a Mirodouro all unto itself – with sweeping panoramic views of the surrounding countryside. All of this scenery was an easy short train ride from Lisbon.

Cascais is a beach resort town, in the vicinity of Sintra, and we taxied over for a visit from Sintra. This town is home to the medieval Nossa Senhora da Luz Fort and the Citadel Palace, although neither of these two were accessible during our visit. It was still nice, further exploring a bit away from the big city of Lisbon, and enjoying a beer on the beach in December.

This was a little mom and pop cafe, with a couple of tables indoors, and a couple of umbrella covered tables outdoors. They specialized in seafood, and everything was fresh. The prices were unbelievably affordable. We both ordered the grilled octopus with potatoes for lunch. It was very good.

Lunch was so good, we simply couldn’t resist going back for dinner. We noticed how extensive the fish menu was at lunch, and decided to give it a try for dinner. We had a couple bowls of soup as appetizers, with grilled seabass, and grilled bream for the main course. It was like a home cooked meal. Very local, and very good a second time.

This little restaurant was discovered on our way back from Castelo Sao Jorge. They had an outside seating area with incredible views overlooking the city.  We ordered mountain smoked ham, and grilled shrimp with tropical fruit and vinaigrette. Snacking with a view.

We found this local restaurant after we toured the botanical gardens at the suggestion of our taxi driver. Another small, family run restaurant with incredibly reasonable prices for everything on the menu. We each had soup, and fish tacos with rice and beans.

This was a very upscale restaurant situated just a hundred yards from our apartment. The menu read like a high drama novel, with specialties included for the holidays. I couldn’t make sense of the a la carte portion of the menu, so we decided on the tasting menu for two, which also came with a wine pairing. It was very good, and reasonably priced for this caliber of cuisine.

We stumbled upon this riverside cafe on our long walk along the River Tagus, very near the monument to Maritime Explorers, and the Balem Lighthouse. We both ordered soup for appetizer, and a mixed protein plate. Not sure how else to describe it – beefsteak, ham, with an egg on top, fries and rice on the side. Different.

This is a very local little place just a few minutes walk from the apartment. We started with some homemade soup, followed by shrimp in a garlic sauce, and squid with potatoes. We ended with a chocolate mousse for dessert. I enjoyed a local white wine with the meal.

The building housing this restaurant was 800 years old, and started as a monastery. The building transitioned to a brewery over time, and later added the restaurant. It was cavernously large, capable of seating hundreds of people. All of the waiters were dressed as monks. We started with some soup, and we ordered a lobster casserole for two. I enjoyed several beers with this meal.

Another little neighborhood place, just a few minutes walk from the apartment. We seemed to have started nearly every meal with soup. It simply was offered everywhere; we like soup, and it takes the chill of late December away. We had grilled seabass, and grilled octopus, with a salad on the side. We finished with a slice of orange cake, and creme brulee.

Reflections on Lisbon. In a word – hilly. Calves and hamstrings did get a workout while getting around Lisbon. There were outdoor stairs leading from an upper part of town to a lower part, occasionally hundreds of steps at a time. It was a thrill getting lost deep in some local neighborhood, and having to discover our way out. Lisbon was a beautiful, diversified city, comprised of many interesting neighborhoods. My favorite was the Alfama – the medieval part of Lisbon, spared from the destruction of the earthquake of 1755, with steep and twisty narrow lanes traversed by the famous Tram 28, and topped with the crown that is the 11th century Sao Jorge Costelo, and its wonderfully scenic Miradouros.