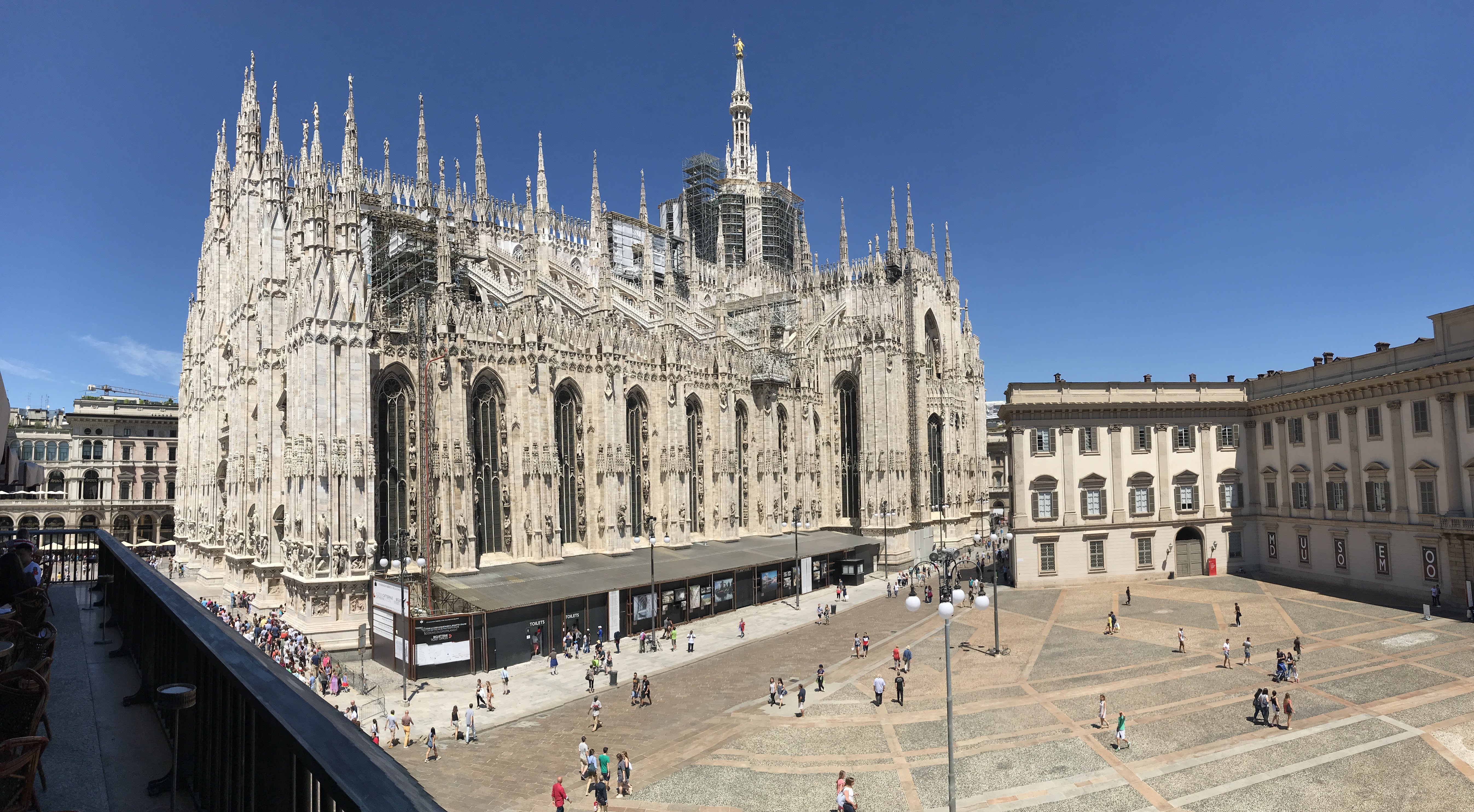 This destination is the first of four on the Northern Italy Travel Planning circuit, as described in  that post.

Milan is the capital of Italian commerce, design, banking, and industry. But there’s so much more to this city. Milan is Italy’s fashion capital, and the locals dress to look the part – especially style-conscious women. In fact it’s easy to distinguish the locals from the tourists and out of towners just by their dress.

There are restaurants of high-quality scattered throughout the city, with impeccable service. I specifically call one of them out in the food scene section of this post. And then there are architectural treasures like the Duomo, and works of art like DaVinci’s Last Supper to be discovered.

The city overflowed with architecture, history, and art. There were plenty of things to do in Milan over a few days’ stay in the city center. But, I kept in mind that Milan is a big city with all those things that accompany big cities, like traffic, congestion, population density, and large scale tourism (think buses). So location was key, and the right location left me with a much better overall experience, because it minimized my need to deal with many of those big city issues.

We landed at Malpensa international airport, which was on the outskirts of Milan, and the airport used by most long haul international flights. It was about a 50 minute train ride from Malpensa into central Milan. We landed at terminal one, and had no trouble finding the train to the center  of town, called the Malpensa Express.

We had had a 15 minute walk from the central train station to the apartment I selected for our three night stay in Milan. The apartment was conveniently located with easy access to the highlights of the city, and within a five minute walk of the Duomo, the Milan Cathedral.

We had no rental car while in Milan. As a matter of fact, it’s unwise to have a rental car in most large European cities, because getting around is much easier by walking, public transportation, and if necessary by taxi, if pressed for time. I do note that Uber is not a thing to do in Italy. Italy is the only place I’ve experienced Uber being more expensive, and more complex than taking an ordinary taxi ride, having tried it in Rome previously, and confirmed it in Milan.

Our apartment in Milan was located on a quiet square, provided easy access to the old part of town, and most of the sights were within walking distance. The weather was a little on the warm and muggy side for this part of Italy. The really great thing about the apartment was that it had four air conditioning units, and kept the apartment to an American standard for summer cool. For Europe this is out of the ordinary!

The apartment was lovely, and I include some photos. It was large enough for a couple, and comfortable, with 14 foot high ceilings, and views over the city from the 9th floor. It was an excellent base of operation from which to explore the old part of Milan, and it definitely gave me that immersive feeling, like I was a local for a few days. The only downside was that our host Franco was a bit of a fascist. He not only required a deposit, but had a bookful of house rules, which included a complete inventory of the apartment’s contents, and generally lacked the patience to interact with his guests like a gentleman.

The very highlight of Milan has to be the Duomo. It is incomparable in Christendom as its third largest church. The largest of course is St. Peter’s Basilica in Rome, followed by St. Paul’s Cathedral in London. However, the latter can’t hold a candle to the Duomo in Milan. It looks nothing like the others. It looks like nothing else I’ve experienced in my travels, with more than 3,200 sculptures and 135 spires adorning its exterior alone. It has flying buttresses – like many of the cathedrals from this era, but they’re hidden in its design so that they do not take the eye from the work of art that is the grand façade of this cathedral. The exterior façade and all of the interior, except sections of its roof, are done in marble from Lake Maggiore. It took five centuries to complete, with the very last of the work ordered by Emperor Napoleon for his coronation there as the King of Italy. The interior is equally majestic and impressive as the exterior. The word incomparable is unavoidable in describing this icon of Milan

A treasure that can’t be missed in Milan is an oil painting on plaster depicting The Last Supper by Leonardo da Vinci in the refectory of the convent of Santa Maria delle Grazie. It took DaVinci 3 years to complete the work of Art, which miraculously remained unharmed through the allied bombing raids in WWII, while the rest of the church sustained significant damage. It is a thing to behold, and difficult to describe with any chance of justice at all. Pictures can be taken and shared, but I found myself lacking the vocabulary needed to describe this work of art. Reservations are required, and view times are strict with visitors having at most 15 minutes to admire the work of Leonardo per visit.

A Milan wonder that should be visited is the Galleria Vittorio Emanuele II, named of the first king of unified Italy, but simply called the Galleria. It is one of the world’s oldest shopping malls, and it is just stunning to wander about. Filled with symbols of the major powers of Italy at the time of unification, like Milan, Rome, Florence, and Turin. The tourists pay special attention to the mosaic bull – the symbol for Turin, and stand in line to spin around 3 times on its genitals for good luck. As a result, there is a hole several inches deep where its genitals used to be. Ah, tourists.

And shopping should be on the agenda, even if not ordinarily inclined for that sort of thing – simply because it’s Milan. There a several kilometers of Corso Buenos Aires dedicated to the less expensive outlets, and discounters that draw local shoppers and tourists alike. People watching is a bonus, as I strolled along the avenue, taking it all in.

Walking around central Milan, I got the impression I was in a grand place. The old part of town had architectural structures around any given corner that grabbed my interest. My impression of Milan was that it is a preeminent city in Europe, with a pedigree all its own – but comparable to the likes of London, Paris, and Vienna. I do know that I wanted to return to catch some of sights I missing during my too short first visit.

This was a restaurant on the same piazza as our apartment, and frequented by locals for lunch only – not open for dinner. It was efficiently run to get the most throughput for the lunch hour – the wait staff moved around like Ricochet Rabbit the whole time we were there. Smoked, aged ham – Tyrol Speck – smoked Scamorza cheese, roasted potatoes. Mixed salad with grilled chicken. Good lunch at a reasonable price for Milano.

No trip to Italy is complete without one stop for pizza. This restaurant was a 15 minute walk from our apartment, and was filled with locals (or at least Italian speakers) while we were there. Tre Salumi, with a little red wine. It was as good as I remembered, and still ponder what would happen if some Italian pizzeria would start slicing their pizzas for their customers. The unthinkable.

We stopped in early for aperitivo. I had a sparkling rose and they offered us some prosciutto and bread as appetizers on the house. We ordered a cheese plate and a charcuterie plate, and we both had Osso Bucco as our main. The cheese plate was divine it had four different cheeses from around northern Italy and they were just so well balanced and just so tasty. The charcuterie plate also had good variety, was complementary to the cheese plate, and made me want to order another round. The Osso Buco was very tender – no knife was necessary, but wasn’t what I was used to previously. The risotto was a little al dente, which I expected, but still very good. The service was fabulous, very attentive, and the price overall was reasonable. This was the best restaurant experience in Milano.

This is a restaurant around the corner from the main drag Corso Buenos Aires. I could tell that it was a local place because it took three of the staff to translate veal shank. My wife ordered a seasonal salad with ham, cheese, egg and mixed vegetables. I ordered grilled lamb and a side salad. I was served a very generous portion of sparkling rose. The food was basic, but very good. The service was prompt. It was a nice place to stop over for lunch from our long shopping trek on Corso Buenos Aires.

This place was just around the corner from our centrally located apartment. We had a rough time finding a restaurant that was open on Sunday and went here as a result of a recommendation from our host. They have a nice outside seating area as you work your way through a shopping area. I had the Spanish sardines with toast and butter, and my wife had octopus with mixed vegetables for appetizers. I had the sea bream with roasted potatoes as my main dish, and my wife had a mixed grill with julienne zucchini. The service was very prompt and the food was served piping hot.

Reflections on Milan. It’s a very large city, with a heart of gold, begging to be explored, discovered, and enjoyed. In retrospect, I would choose either early May or October for a return visit. I think this would provide for more temperate weather, as well as less tourist pressure. 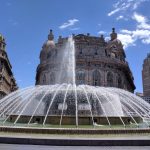