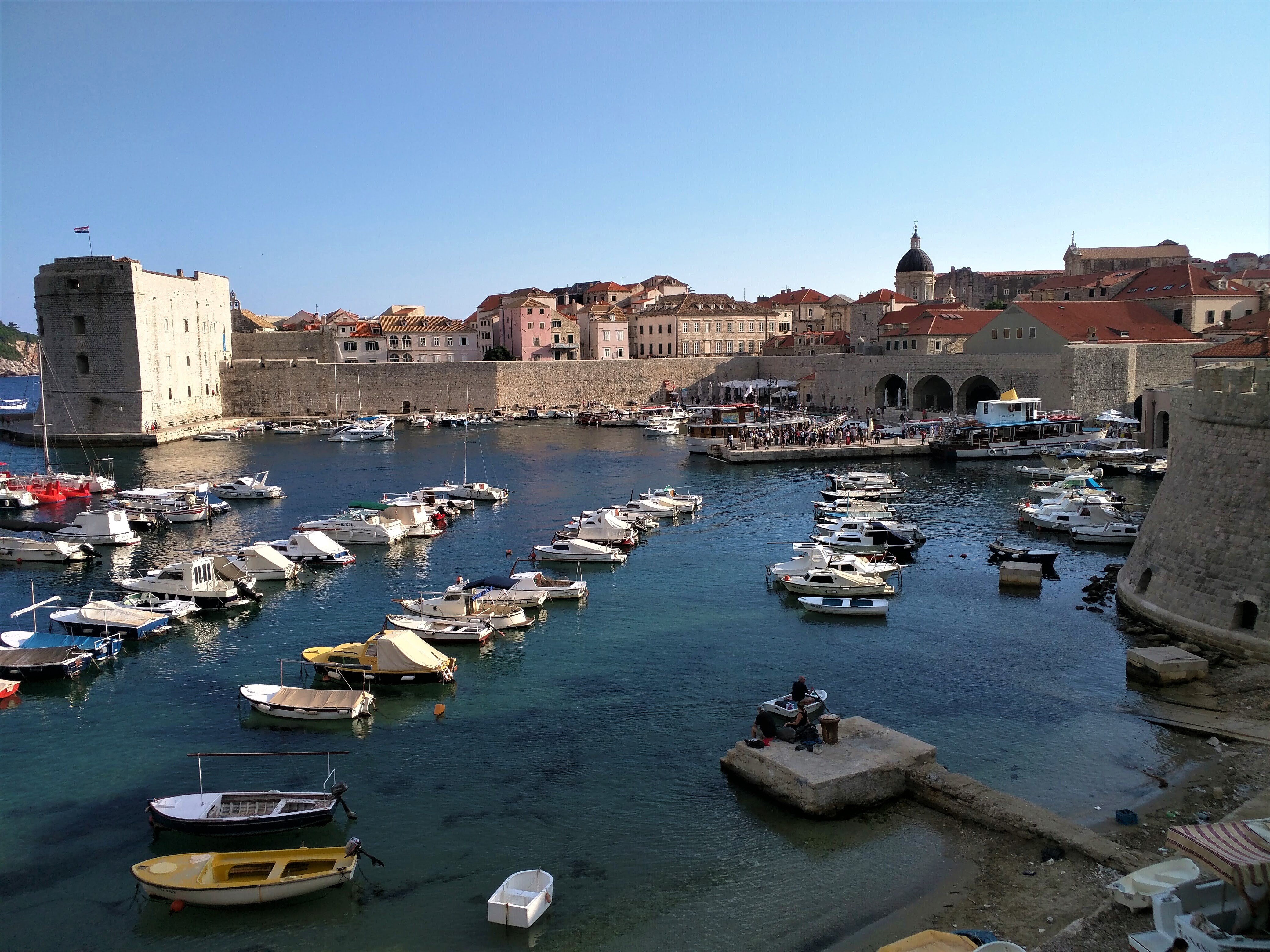 If Croatia is the gem of the Balkans, then surely Dubrovnik is the gem of the Adriatic. Deeply steeped in history, Dubrovnik was once a city state – from the 14th through the early 19th centuries, vying with the likes of Venice for control of commerce in the Adriatic. The city is surrounded by medieval walls built over hundreds of years, which have never been successfully breached, although many sieges have been attempted over time. The recent city’s history witnessed the siege of the Serb and Montenegrin armies after the declaration of Croatian independence in 1991. A small number of buildings within the ancient city walls were destroyed, but many more were damaged. Restoration has since been completed, but they did leave one building with war damage to bear witness to the deeds of that era.

It is under one hour flying time from Zagreb, Croatia’s capital city, to Dubrovnik – a scenic flight as well with a window seat, with views of the blue Adriatic, and its island dotted coast for most of the trip. Transiting through Dubrovnik’s regional airport on an early Tuesday afternoon could not have been easier, especially with only carry-on luggage in tow. A picturesque 30 minute taxi ride following the Adriatic coast, and we arrived at the outskirts of Dubrovnik, above the city by several hundred feet where most of the residential parts of this area were found. It was early June, the skies were a deep, cloudless blue. The view of the old town and the Adriatic were beautiful from street level. The excitement was building just stepping out of the taxi.

It took the taxi driver a turn or two to find the location with the address I had given him. We were on a street north of the walled city, and significantly uphill from the walled city. The farther north, the further uphill went the terrain. So what we had were homes and apartments accessed by stairwells at street level, which stretched to hundreds of steps going up to various homes in the hills. Navigating which stairwells lead to which address was difficult even for the taxi driver, a native of the area.

Ascending the 100+ stairs to get to the apartment from street level with luggage in tow was an appetite building, aerobic workout. And I kept in mind that we’d have to do this every time we returned to the apartment, which we had for 5 nights. The good news was that I had to haul the luggage up the stairs just once.

The lovely apartment was booked through Homeaway. It was spacious, with all of the amenities needed for an extended stay – including a washing machine, and good working Wifi. But the true highlight of the apartment was the spectacular views of the city and the Adriatic from its balcony. It made climbing up all those stairs so worthwhile.

The ancient city inside the walls was just stunning, with architecture dating back to the 17th century with the Dubrovnik Cathedral, and further back to the 16th century with the Saint Savior Church. Wandering around inside the walls was like meandering through history. The streets were clean, and lined by medieval architecture under a turquoise blue Adriatic sky – with a steady tourist throng ebbing into and out of the city.

Dubrovnik is a very popular tourist stop, and moreover a port of call for some of the largest cruise operators in the Mediterranean. It takes a little strategy to get an immersive travel experience within its ancient city walls. The best thing to do is simply avoid visiting during cruise ships’ ports of call. There are searchable published schedules with details on dates, times, and even the typical passenger manifest. Otherwise visiting either early in the morning, or later in the evening also tends to avoid the cruising throng.

A morning walk on the medieval city walls was the first truly immersive travel experience for me in Dubrovnik. Under perfect weather, with blue Adriatic skies, and the kind of sunshine that requires good polarized sunglasses, we slowly meandered the wall circuit. It was a beautifully memorable experience.

My wife and I are big fans of the HBO series Game of Thrones, and we knew that Dubrovnik was a filming site for the series. Dubrovnik is King’s Landing in the series. Some of the most interesting scenes filmed in Dubrovnik include the “Walk of Shame” at the Jesuit Staircase, St. Dominic Street was where many market scenes were filmed, The Museum Rupe as the exterior of Little Finger’s brothel, The Plo?e Gate was used as the entrance to the Red Keep, and The Rector’s Palace used in a Qarth episode. So with all of that personal interest, we took a multi-hour Game of Thrones tour with a local guide. I both enjoyed and would highly recommend such a tour for any fan of the series.

This island was visible from the balcony on at our apartment. It was an easy day trip from Dubrovnik with ferries departing frequently. It was difficult to resist an afternoon island excursion with the wonderful weather we were enjoying during the trip.

I had a rental car, actually a well appointed Audi A3, and wanted to add Bosnia Herzegovina to my countries visited list. I had read some good reviews in a travel guide I had previously used about Mostar, and decided to visit. It was a 2.5 hour drive each way, most of it through hilly, stark, scrub country with hardly any civilization between the Bosnian border and Mostar. Mostar itself was very compact, with a little shopping district surrounding its “old bridge.” The rest of the town was unremarkable and hardly worth the 5 hours round trip from Dubrovnik.

Further whittling away at countries not visited, we took a day trip to Kotor, Montenegro. This was big contrast to the relatively disappointing side trip to Mostar, as both the drive to get there was scenic along the Adriatic and Kotor Bay, and Kotor itself was a stunning location with great views over the water, and a wonderful little town to explore.

Because of the enjoyable short ferry ride to, and explorations of Lokrum Island earlier in the week, I decided I needed to get more water and island time. There are thousands of islands dotting the Adriatic coast, and there were plenty within an easy day cruise from Dubrovnik. So naturally we indulged, with the weather as cooperative as can be. We hit three islands, Kolocep, Sipan, and Lopud, spending a wonderful day on the water with lunch on board.

This appropriately named restaurant is atop a five story building in the center of Dubrovnik. We had a drink at a local cafe where our waitress highly recommended this restaurant for dinner. The views were grand, the menu upscale, and on the pricey side for Dubrovnik. The food was very good. We had the seabass carpaccio, and octopus confit for appetizers, pan seared mackerel and braised beef cheeks for our main course, followed by mango and raspberry coulis shared for dessert. It was an excellent dining experience and a perfect entree to the old city of Dubrovnik.

This restaurant is in the center of old Dubrovnik, inside the city walls, on a lovely square at the top of the Jesuit Steps, overlooked by a grand church. We stopped here after a long day of exploration with hearty appetites. I started with a dozen of the local oysters, then we followed with grilled squid over Swiss chard and potatoes, pan fried fillet of seabass with crispy veggies, and we shared a green salad. Good seafood, very nice atmosphere overlooking the square. The service was good as well.

This appropriately named cafe is what we found at the top of the Dubrovnik cablecar, which whisked us up to beautiful views of the Adriatic and the surrounding islands. We both had grilled squid with fresh veggies, and shared a green salad and grilled potatoes. The views were lovely, and the food was good. Service was a bit slow because of the volume of customers around sunset.

This was our meal in the center of Mostar, Bosnia Herzegovina, overlooking its famous old bridge. We had a large lunch of grilled trout with potatoes and Swiss Chard, a hearty, fit for a lumberjack mixed grill with french fries, mustard on the side, and shared an interesting local mixed salad. This was nice stop after a long drive. The food was basic, but good.

This restaurant is not inside the walls of old Dubrovnik, rather it overlooks the Adriatic where the Game of Thrones Blackwater Bay episode was filmed. It was a like having a meal inside a picture postcard. We shared Dalmatian style mussels in tomato sauce, followed by grilled squid with veggies, and a mixed grilled seafood plate with veggies. The food was good, but we really paid for the views with dinner.

This restaurant was inside the walls of the old city of Dubrovnik, at the base of Saint Ignatius Church. This was our dinner stop after the long day on the road visiting Kotor, and climbing 1360 steps to its old fort walls. We split an order of mussels in red/white wine sauce, shared a cucumber, tomato, feta, and olive salad, then grilled trout with Swiss chard and potatoes, and grilled chicken breast a la Dubrovnik with potato croquettes. I never got tired of the local seafood. Basic, and very tasty.

Reflections on Dubrovnik. What an epic, memorable destination. The weather was perfect, the crowds on the thin side with cruise ship throng avoidance planning, the side trip to Kotor was spectacular, island hopping was enjoyable, the food was very good, and the people were friendly and spoke English well. I would go back to Dubrovnik to visit again, but would not recommend this destination as a cruise ship port of call – as you’re only way to visit. It would simply not have the same impact as spending several days taking in all of the sights.