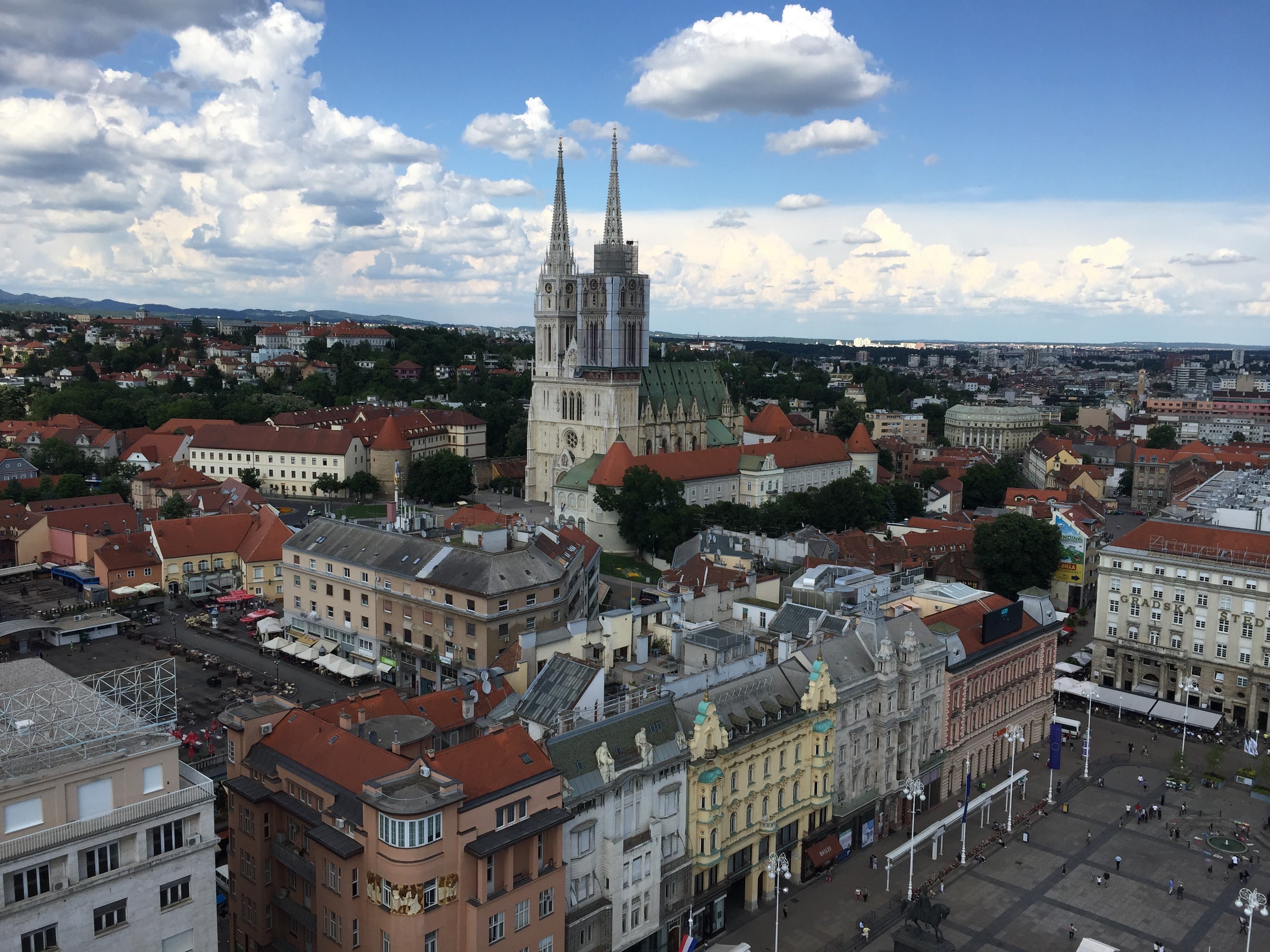 Zagreb is the capital city of Croatia, and airport of entry for long haul international flights. It’s an interesting combination of leftover, communist era gray block apartments, the modern city of Zagreb with buildings and architecture that look similar to any late twentieth century design, and classic 19th century Austro-Hungarian architecture that fooled my eye into thinking I was strolling through sections of Vienna or Budapest. Compact, and a joy to walk all of its streets at a leisurely pace, immersively discovering it’s wonderful cafes, restaurants, historic sites, and museums – some a little quirky, like the Museum of Broken Relationships.

After a short layover in Paris, the two hour flight to Zagreb was uneventful – the very best kind of flight. Transiting through the Franjo Tu?man international airport in Zagreb, named after the Croatian historian, and first president of the republic post the dissolution of Yugoslavia. With only carry-on luggage in tow, gliding through passport control, then exiting to the ground transportation area required a mere 15 minutes – the hallmark of a smaller airport, something the size of Columbus, Ohio, or Saint Louis Missouri in the US. I had pre-arranged for a private car to pick us up with our apartment host. The price was so reasonable, it gave me no incentive to research the availability of Uber, or the local price of airport taxi service. The ride into central Zagreb was 20 minutes, complete with a drive through soviet-era, gloomy gray apartment blocks – the bane of the poorer countries from that era. That gloom was a sharp contrast as we entered central Zagreb, with its lovely 19th century architecture making up the old part of the city.

Our apartment for three days in Zagreb was on Ribnjak Ulica, right across the street from Ribnjak Park. The pictures below show the view through the front bay window to the park and the Zagreb Cathedral in the background. The apartment was bright and spacious, with a grand sitting room that included a piano.

This apartment was selected through Airbnb, which is not my first choice for apartment rental because they do not disclose the location of the property until booking has been completed, and I have committed to the rental. This particular apartment is a case study as to why I am averse to using Airbnb.

The photos of the apartment on Airbnb were lovely, the views from the front window were alluring, but what was not known to me because the property location was not disclosed, therefore a Google Street View was not possible, is that the apartment was above a nightclub on a street with regular tram traffic. This might have been a bad experience, save for the fact that the night club was no longer in operation. The tram working hours ended in the early evening, so the street noise was not an issue at night, and sleep time was relatively quiet. Dodged one, but it could have been much worse. Caveat emptor with Airbnb.

The Airbnb drama aside, the apartment was in a residential part of central Zagreb, within easy walking distance to the old town. There were many restaurants and cafes within a 10 minute walk, and it did feel like being a local for a few days. That’s how immersive travel happens for me.

We did a discovery trek around the old town part of Zagreb. Most of the old town revolves around its main square, Ban Jelacic, and is comprised of 19th century Austro-Hungarian architecture. The old town is compact, relatively flat, and a pleasure to discover by walking. My wife and I easily walk 10 miles per day for exploration and discovery, and we work up healthy appetites as a result. We eat well while traveling, and the Food Scene section covers all of our indulgences.

The weather was lovely in the first part of June, 2016 – with warm days, blue skies, and cool evenings. But no matter how blue-sky the day started, there was a significant chance of showers in the late afternoon, or early evening. Showers may be an understatement. I don’t know if my experience was unusual, but when it rained it was a deluge – as an example, see the Food Scene entry for Kaptolska Klet, a fine dining establishment that flooded while we had dinner there one evening. A strong umbrella is necessary equipment for visiting this lovely part of the Balkans in early June, by my experience.

Medvedgrad is a fortified medieval village on the south slope of Medvenica Mountain, a 10 minute taxi ride from Central Zagreb. It is little touristed, and it’s not on anyone’s list of sites to visit in Zagreb. Below the main tower of the castle ruins is Oltar Domovine (Altar of the Homeland) , dedicated to the fallen Croatian soldiers in the war for independence. The views from Medvedgrad were grand, and on our clear day visiting there we could see for miles – all the way to central Zagreb and beyond.

Maksimir Park has been open to the public since the end of the eighteenth century. It was the first public park open to the public in southeastern Europe. It’s architected like an an English garden, with grand green spaces, walkways, and lakes. It was a delightful, uncrowded tour on a sunny day, enjoying a long walk in the great outdoors of metropolitan Zagreb.

I rented a car for the day, and enjoyed a lovely two hour drive from central Zagreb to Plitvice Lakes National Park. This is a heavily visited site, with tour buses pulling in by the dozens. There was some bureaucracy to be endured in working through the entry process due to the fact that this facility is government operated, and the crowds were thick. The park is grand, and required bus service from the its entry to its interesting parts.

It was possible to separate from the pack and find some space to explore the park. We bused to the highest part of the park, and worked our way back. As we walked our way through it for a few hours, the park unfolded before us in a series of plateaus. It should have been a four hour walk through some of the most beautiful scenery I have experienced. As it turned out, we were hit by a deluge-like rainstorm at the three hour mark. My wife and I both had sturdy umbrellas with us, having learned our lesson from the afternoon storms in central Zagreb. But the umbrellas did not stand up to the torrent, and became super saturated – eventually rain fell straight through the soaked umbrellas. I hadn’t previously experienced anything like this.

It was a painstaking march to leave the park under a heavy rainfall with leaking umbrellas. But once out, we drove to Rastoke en route back to Zagreb. The rains had cleared, and  blue skies were restored by the time we had arrived. We had a wonderful, multi course meal at Jelovnik Konoba (see the Food Scene section) , and explored the mini-Plitvice on their grounds. The little private park was lovely, and relatively uncrowded. It was like having our own little Plitvice with little tourist traffic.

Located on Tkal?i?eva Ulica (kind of a restaurant row in Zagreb), this little restaurant with nice outdoor seating, had a daily menu presented on a chalkboard. The day we were there, they had fish, steak, and seafood items on their hand written menu. We chose a charcuterie appetizer plate, squid over greens and potatoes, and grilled trout with handmade noodle dumplings. The food was good, and the vantage point was nice for people watching.

This was a large restaurant with an equally large and varied menu, focusing on meats. In fact the menu was so varied, we ate there twice. Our first time, we ordered a grilled meat sampler for two, with grilled mixed vegetables. Cevapi is a Croatian grill staple, ground beef and pork, with spices. Also on the plate were two types of chicken, one grilled, the other stuffed with cheese and spices. This was genuine local fare. It went  well with beer.

This was a fancy restaurant with an upscale menu. We wanted to sit outside, however it started to drizzle and we were relocated indoors. We ordered a whole smoked, roasted duck with grilled vegetables, and cabbage with carrots on the side. The food was nice, but the real show was the weather. With the restaurant packed with customers, including a large wedding party, the skies opened up, and we were deluged with rain. It rained so hard that it came right through the roof, and flooded the restaurant with water several inches deep. It was interesting trying to eat while the staff were squeegeeing the floor dry.

We walked to this restaurant on our way back from our tour of Medvedgrad, grabbed lunch and took a taxi back to central Zagreb from there. The pictures are a shade of pink because we were under a red umbrella outdoors. We ordered a mixed salad, a cheese plate, and a mixed grill – pork and beef, with grilled vegetables. The mixed grill was a staple on many menus in Zagreb.

This restaurant had a large, and varied menu, including a good variety of seafood, which is why we came back to it. This time we had a charcuterie and cheese board, a green salad, grilled vegetables, grilled chicken skewers, and grilled octopus over potatoes and peppers. The octopus was very good, but one needs to be a fan of that sort of thing.

This restaurant was en route back to Zagreb from Plitvice Lakes National Park. The restaurant was part of a resort that resembled a mini Plitvice Park. It was nice because it was as scenic as Plitvice, but much less crowded. We had cream of mushroom soup, chicken soup, a trout spread with whole wheat bread, grilled veggies with emphasis on mushrooms, grilled trout, fried trout over bread, grilled zucchini and tomatoes with a light white sauce. The food was very good, and the portions generous. It was very pleasant outdoor seating with a view of the surrounding park.

This cafe overlooks the lively Dolac Market on Ban Jelacic Square. It is a great place for people watching. We had meat filled and cheese filled Burek. This is a baked phyllo dough pastry filled with your choice of meat and cheese. It is common in the Balkans, having tried this delicacy previously in Slovenia and Serbia. It’s Balkan fast food.

Reflections on Zagreb. A little rough around the edges, but Central Zagreb, with its 19th century Austro-Hungarian old town was a lovely and interesting entry into Croatia. The capital city, the center of Croatian history and culture, what a great contrast Zagreb was to the rest of the Dalmatian coast. I would highly recommend spending a few nights in Zagreb as part of any tour of Croatia. The people were friendly, English was common, and spoken well. The cost of everything we did, including fine dining, was very reasonable by European standards. I had an immersive traveling experience in Zagreb, would visit again, and would recommend it as part of a greater Croatian experience.