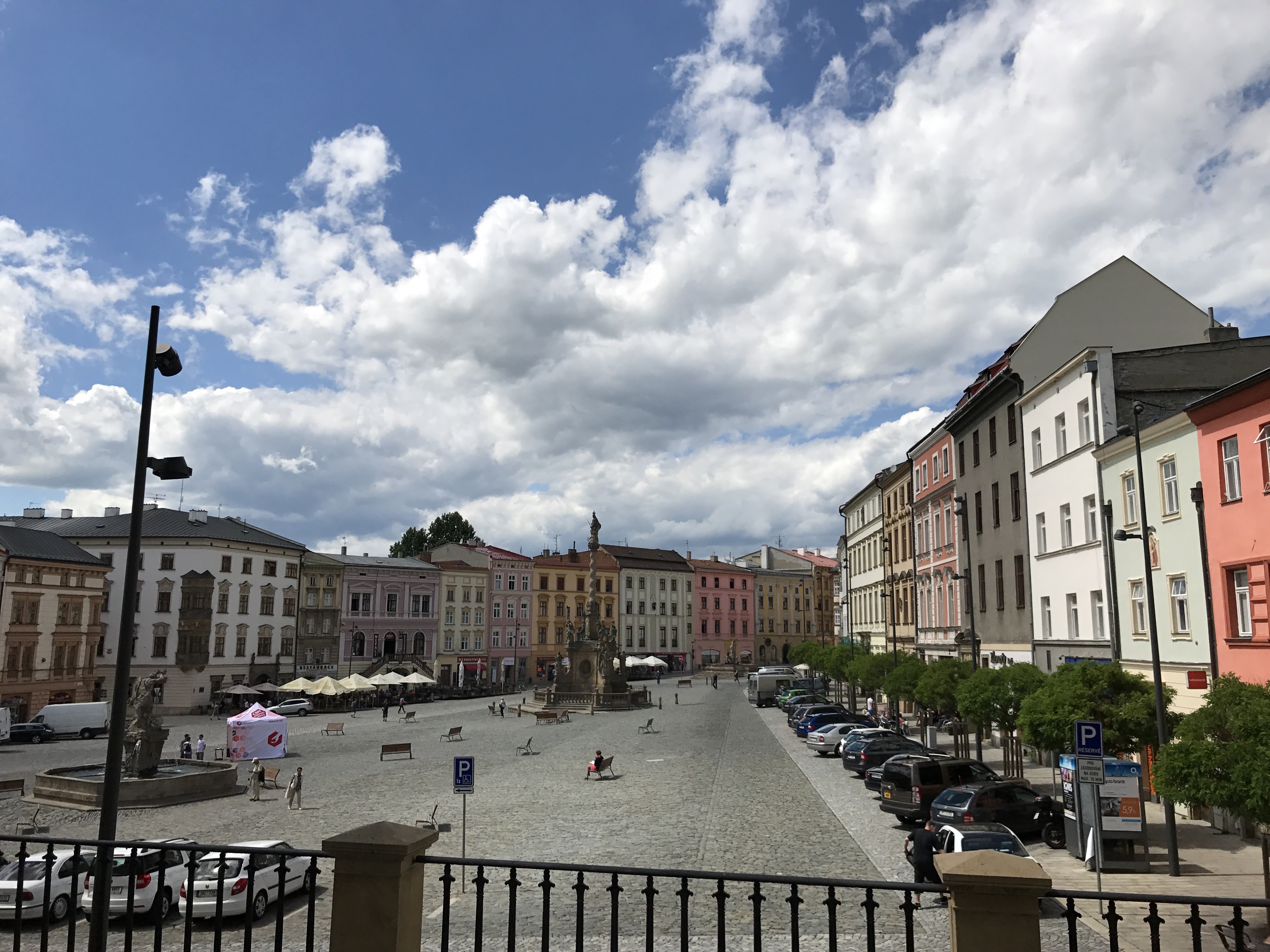 This is the 5th destination on our Western Slavic Countries itinerary as described in that Travel Planning post.

We set off from Wroclaw To Olomouc along a scenic route I found via Google maps. After a stretch on the A4 toll road, we were on tree-lined, twisting and turning two lane roads as we drove through the hillsides, with farmland peering through the trees. And as time went by, we saw the landscape become hillier and trending toward mountainous. But all along the way we had two lane roads where we couldn’t drive more than 50 miles an hour or so. And at many points we had the road completely to ourselves, with not a soul in front, nor behind. There was some occasional congestion, as it was a main artery for traffic along the north-south corridor between Poland and the Czech Republic. It was a wonderful drive, interesting, appealing to the eye, and relaxing.

It was the last chance to spend our Zloty before leaving Poland for the Czech Republic. We chose Głuchołazy as it was larger than most of the towns we passed through, somewhat midway to Olomouc, and were hopeful to find a cafe for a quick bite to eat. As we pulled into town, we found the main square, parked the car, and walked around for a bit. We eventually stumbled onto a little café for an early lunch. We had a cappuccino, a cup of tea, and a couple of sandwiches, all for $7 US. Poland was inexpensive, and we would learn soon enough that the Czech Republic was even less expensive.

The first thing we did as we entered the Czech Republic was to find a gas station to buy a vignette for the vehicle – essentially a road tax sticker – which allowed us to legally drive on Czech roads. This was not an especially easy thing to do as the lovely young lady at the gas station spoke zero words of English, and I only know two words in Czech, neither of them would’ve helped in that particular situation. However, with the help of Google translate, I was able to figure it out, and off we went.

Arrival in Olomouc was easy. It was an uncongested smaller city with a population of 100,000. Navigating to the center of town and parking close to the apartment was delightfully straightforward after a long, but enjoyable day on the road.

Our hostess showed us the apartment, and it turned out to be lovelier than it was depicted on Booking.com. The apartment in Kraków was grand and luxurious but this one was better. It had better lighting, with nice views from its large windows. It had a balcony overlooking a quiet courtyard. Centrally located, immaculately clean, and it felt comfortable.

The apartment had high ceilings and crystal chandeliers in all the rooms, including the bathroom. The bedroom had French doors. All of the doors in the apartment had etched glass and ornate hardware. The floors were a herringbone parquet throughout. There was a lovely level of detail throughout the apartment. This was the kind of place I would choose as base of operation were I to move to Europe.

The town was so pleasantly uncrowded, and to say it was lightly touristed is an understatement. I think we were among the very few non-locals in town. Walking around, even in the town’s main squares, was easy and very relaxing. The town was laid back, and unhurried – a contrast to the larger cities of Krakow and Wroclaw that we had visited earlier in the week.

I hesitate to use the term “mini-Prague”, but it is appropriate. Prague was beautiful when I last visited in 2012, but it was definitely discovered and densely touristed. Strolling along the Charles Bridge in Prague’s old town – simply stretching out each arm to its full length would have touched three tourists with each hand. Not so in Olomouc, with similar architecture and design as Prague, but with no crowds, and aside from myself and my wife, apparently very few tourists as well.

And so we arrived in Olomouc, the historical capital of ancient Moravia, a kingdom that existed for hundreds of years before joining with Bohemia to form what is now the modern day Czech Republic. Moravia forms the Eastern third of the Czech Republic, with Olomouc at its center. Olomouc is also the ancient seat of the Bishops of Moravia, with references to the bishopric in literature dating to the 10th century. Olomouc is steeped in the cultural and religious history of the people of Moravia, which easily discovered with a stroll through town.

Some of the highlights of Olomouc have to be the number of beautiful and historic churches in town, with the most prominent being St. Wenceslas Cathedral, founded in the early 12th century. But there are a half dozen others, including Saint Maurice, Saint Michael, John Sarkander Chapel, and The Orthodox Church – scattered throughout the town.

The old part of town had construction and restoration projects in progress during our stay, including roadwork on the characteristic cobblestone roads found throughout town. Even the construction projects were interesting because they exposed the history of the city through the process. 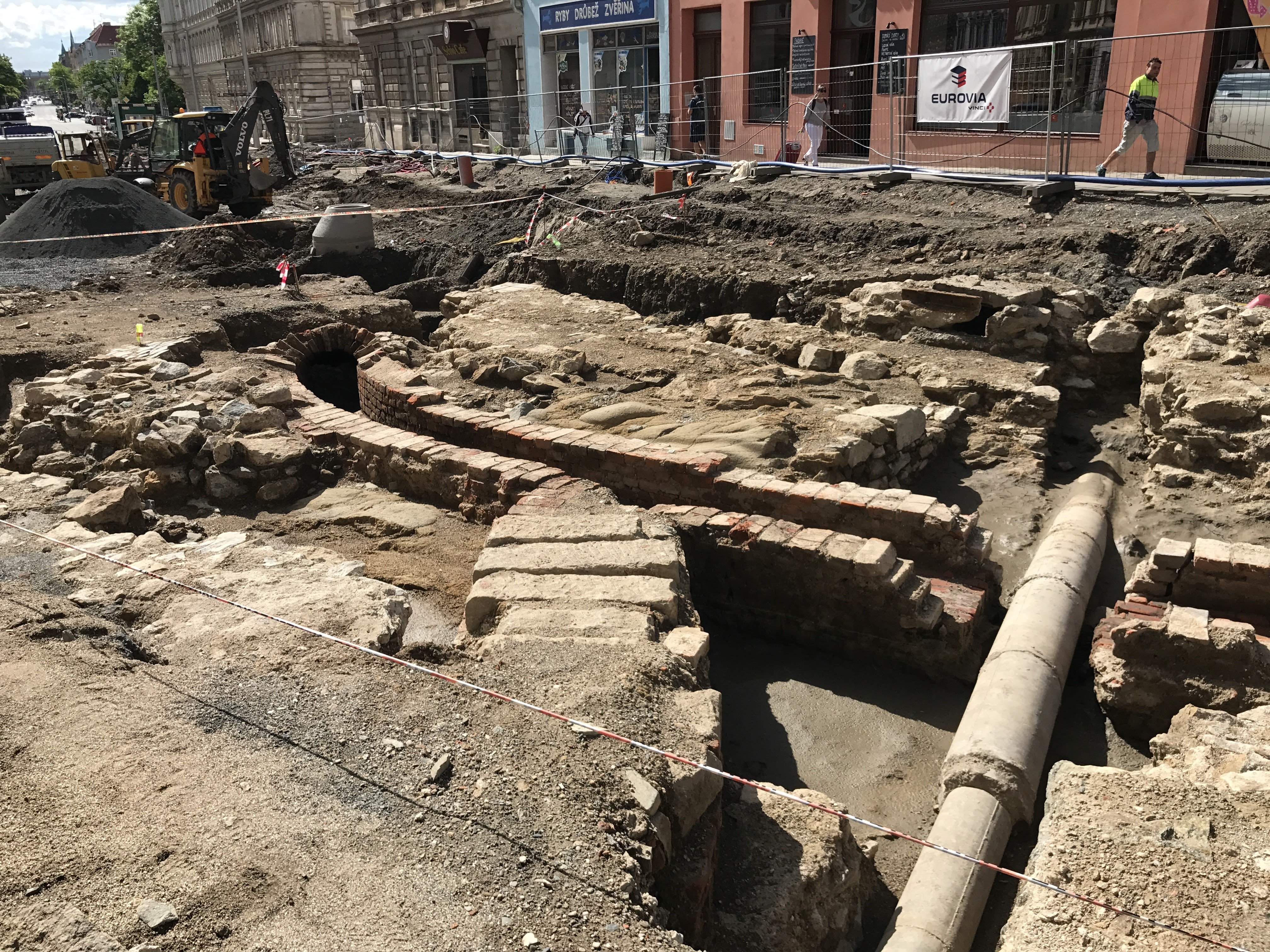 I love food, and I travel in particular to try new, local fare. And so, I was on the hunt for the famous stinky cheese that is sourced in this destination. Olomoucké tvarůžky is the stinky, ripened soft cheese that bears the city’s name. I’ve read about, I’ve seen travelogs describing it, and I wanted to try it. But finding it proved to be elusive, even with advice from from our lovely hostess. As it turns out, we were too early in the season – the cheese needs to age for several months, and only attains it stinky goodness towards the end of the year. 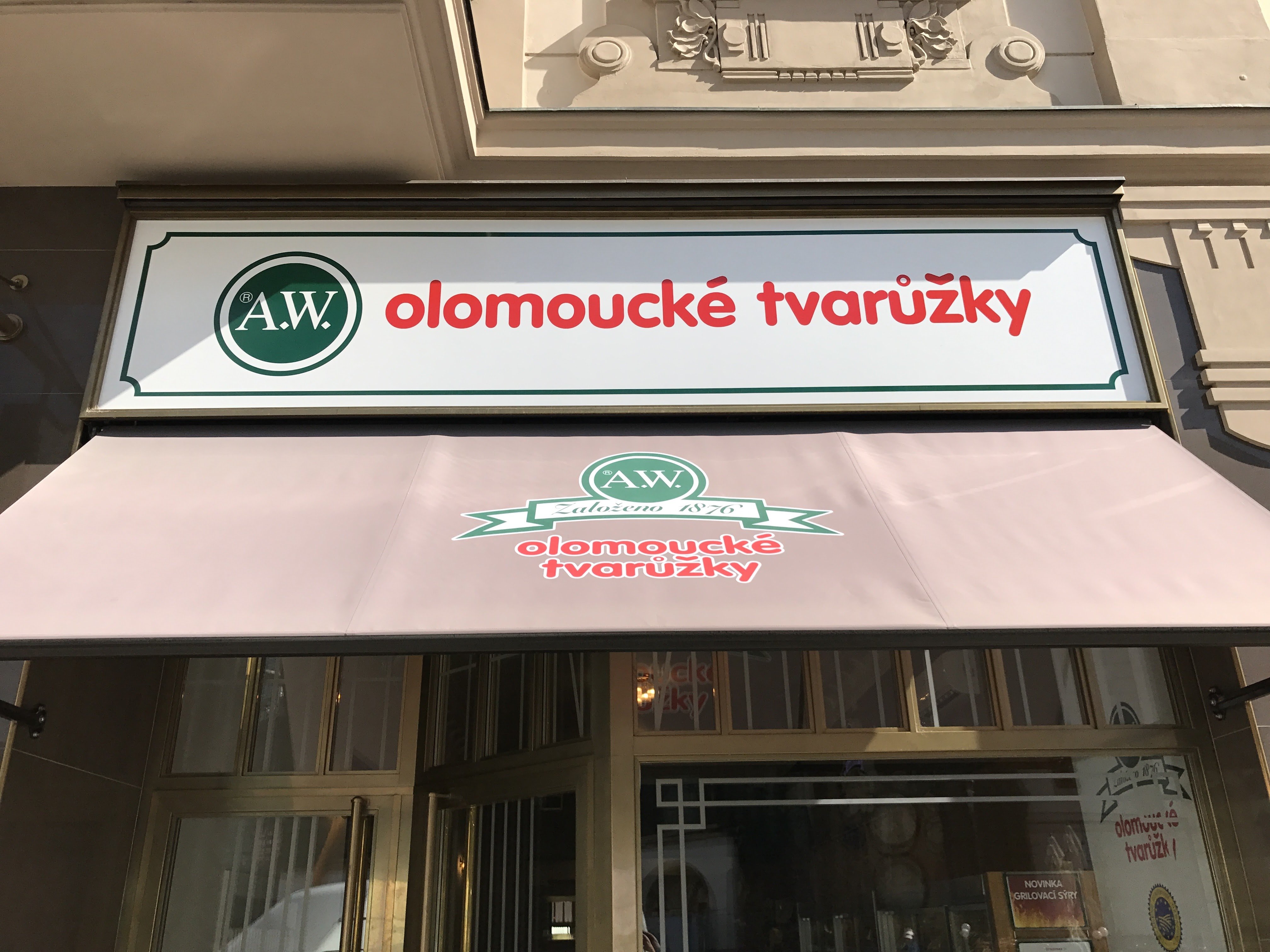 Pork knee, goulash, grilled veggies, fresh veggies, and Olomouc cheese spread to start. Apparently there was a bit of translation issue, and the cheese turned out to be a pork fat spread, which wasn’t bad, but it wasn’t what we were looking for. After further advice from my landlady via sms, we ordered what we thought was the right cheese. But alas we failed to get the right pungent stuff. It took an hour to cook the pork knuckle, so we have a second round of appetizers which, was a really bad idea. I didn’t know the difference between a pork knuckle, and a pork knee – but when it arrived, it was as big as my head. Very crispy skin, fatty, but with lots of meat. It was an enormous amount of food. It was every bit as good as it looks, if you like pork. The vegetables helped. There were lots of spicy vinegary peppers, raw horseradish, mustard, and raw vegetables. The meal could have easily served 4 people, and was very inexpensive at under $40 including a generous tip.

This enormous cafe has incredible 90 Mbps up/down free wifi. And the food with drinks were very reasonable. Egg with ham scramble, croissant, cappuccino, and black tea.

Platter with smoked meats, sausage and Olomoucké tvar?žky cheese (the famous stinky variety, I hoped), trout filet over risotto, perch fillet in garlic butter, grilled veggies – on the table starter: baked phyllo strips, lightly salted with dill seed. The platter came with an apple horseradish sauce which went well in particular with the sausage, and the ham. The apple mellowed the strong horseradish flavor. The tvaruzki was surprisingly mild, I was bracing myself. The goose pate was rich and smooth, and the pine nuts added an interesting texture. The serving of trout was generous, the risotto had a sweet paprika and zesty tomato influence. The perch was very mild, as were the patties of garlic butter. The food was very good, they have 2 items on the table on arrival which will go on your bill if you touch them.

Typical Pivovar we’ve seen in Slovakia which brew their own beer and serve hearty fare at reasonable prices.

Beef flank steak, pork tenderloin, chicken breast, smoked boneless pork knee, chicken wings, green salad. It was every bit as good as it looks in the photo, with the smoked pork knee, and wings as the tastiest. The wings were fall off the bone tender, baked with zesty paprika flavor – not spicy. And there just was enough of the smoked pork knee, it was that good. The rest was good, but paled by comparison to the wings and pork knee. More lumberjack food.

Olomouc was by far the most immersive travel experience on our Western Slavic Country circuit. Among the contributing factors were the relatively smaller population, the long history of the city in the millennium of Moravian culture, and of course the lovely local folks. Adding to the allure is the affordability factor – I had a conversation with our lovely hostess trying to understand the cost of living in Olomouc. The beautiful apartment we had as our residence in the city would rent for 600 euros on a monthly basis. I would be tempted, but not based on affordability alone, although it’s always a factor. Olomouc would be a lovely base of operations to explore Europe for an extended period of time.