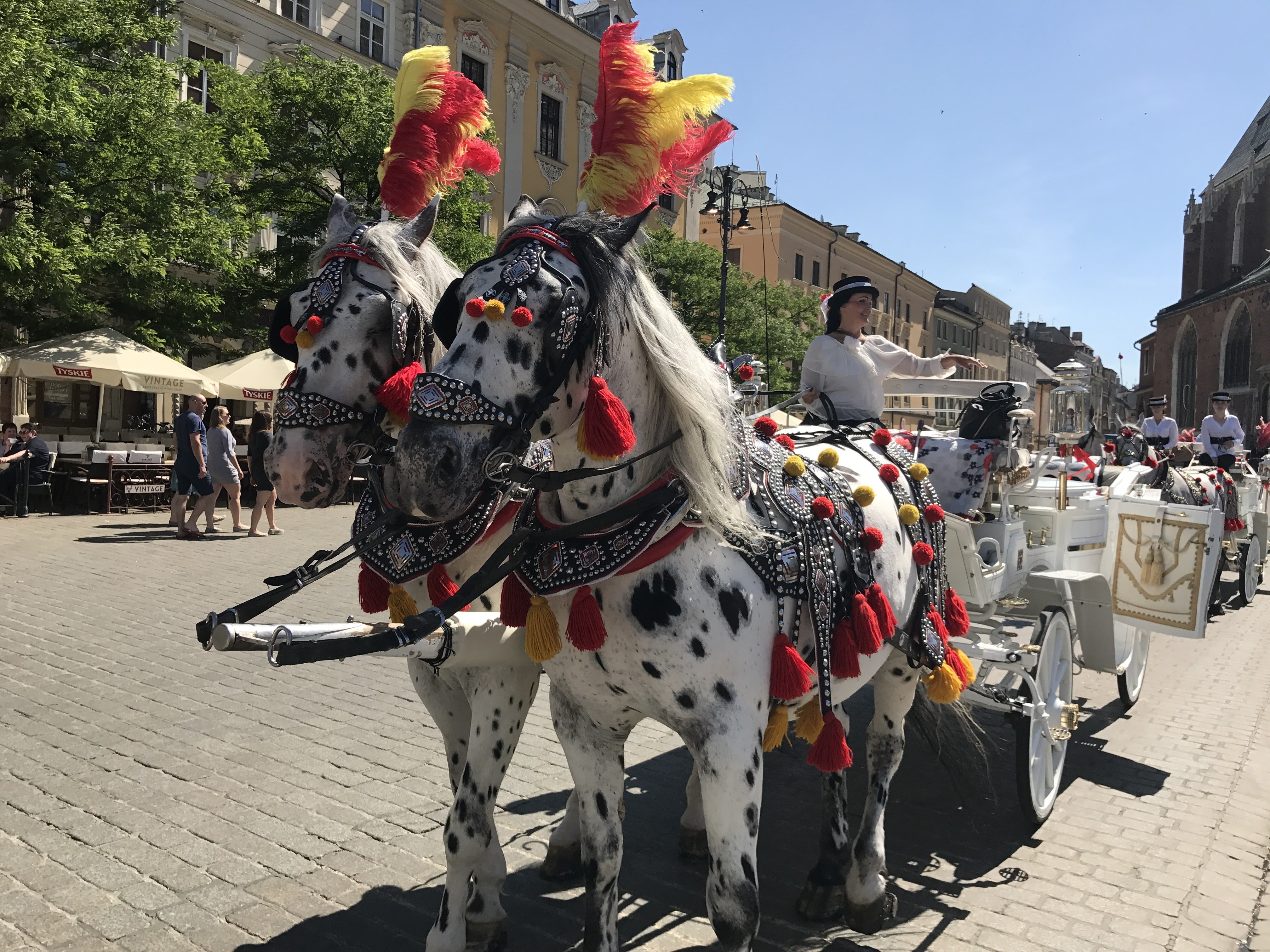 This is the 3rd destination in the Western Slavic Countries circuit as described in that Travel Planning post.

The route from Kosice to Kraków was mostly a 2-lane road with construction at many points along the way. As the main route, it handled all traffic including trucks, farm equipment, bicyclists and all vehicles imaginable. As such, it made for some interesting driving – the kind where keen attention is necessary as anything may come around the next curve in the road.

We broke up the four and a half hour trip with a stopover in a little ski village in the southernmost part of Poland called Krynica. It was so small that we walked its entire length in 15 minutes. We stopped for enough time to stretch our legs, and grab a little bite to eat – to satisfy ourselves for the remainder of the drive into Kraków.

I noticed that the countryside changed once we entered Poland – from a rolling meadow in Slovakia to more of a woodland landscape, and trending toward mountainous. And as as we entered Poland, I noticed that we had climbed to a higher rung on the economic ladder in Central Europe. Gone was any leftover communist era construction. Most of the houses looked very well-kept, larger, more ornate, and located in remote areas. I guessed that they could have been weekend, or vacation homes for well to do city dwellers.

On entering the city limits of Krakow, I knew right away that we were in a much larger city than Bratislava and Kosice. Traffic was thick and slow. I had the GPS in the BMW programmed to guide us to a plaza close to where our apartment was located in the old town. Finding parking was a panic. We ended up at an attended 24 hour parking garage that would cover us for three days of parking for a mere 105 Zloty, the equivalent of maybe $30. A bargain given that it was staff operated 24 hours around the clock, and I wouldn’t have to worry about the BMW at any point in time.

It was a short five minute walk from the parking garage to the pedestrian center of the old town on Florianska Street. I gasped as we walked through the gate into  the old town, having passed a McDonald’s in the process. I reflected on the lesson learned from my experience in Bordeaux, where our apartment there on Saint Catherine Street was within walking distance to a McDonald’s, and the location turned out to be too touristy.

Florianska street was definitely well touristed because it was part of the “Royal Route”, which starts at the Florianska Gate and works its way to Wawel Castle through the Market Square – passing right by our apartment. The route was taken by Polish kings as the preferred path to their coronations in the 14th through 16th centuries, and has many of the old town’s attractions along the way. So naturally, there were tourists. And a McDonald’s.

It was a good choice to have selected Bratislava and Kosice as the first and second stops on the Western Slavic Countries itineraries because they were good warm-ups for the grander, more visited Krakow.

The apartment was fabulous. It was grand, spacious, and very accommodating for two people. While it had a single bedroom, it was capable of entertaining a dozen guests. It had ten foot ceilings, large doorways, and near floor to ceiling windows that faced on to Florianska Street. An unbelievable three night residence, priced competitively, centrally located, and less expensive than a hotel room within walking distance of the old town.

After settling into our new home for 3 nights, we were ready to stretch our legs and do some initial exploration in the vicinity of the apartment. The area is truly steeped in history, with consistent architecture from the 15th and 16th centuries throughout – with no damage from the wars that scarred so many beautiful European cities. I must have looked like country bumpkin on his first visit to New York City – wide-eyed as I walked around taking it all in.

We were famished after driving all day with a light meal for lunch. Fortunately, our lovely hostess left us several strong recommendations for restaurants focusing on local fare. She insisted we visit Ogniem I Mieczem (The Fire and Sword) first to set the expectation for food in Krakow, advising us to take a taxi, which we did. The meal was spectacular, and is detailed in the Food Scene section. The food was so good, and so filling that we did not take a taxi back to the apartment, electing instead to walk off some of the thousands of calories we just enjoyed. What a great introduction to the Krakow.

Normally I like to roll my own for this sort of thing, but there was an organized walking tour of the old town that met at 10:00 by the Barbican, which was very close to our apartment, so we joined them. I wanted to get the lay of land from a local. As it turned out, our guide was a graduate of the famous Uniwersytet Jagiello?ski (Pope John Paul II’s Alma Mater), with a degree in history. He was a tall, bearded man in his late 30s, called himself a BFG (big friendly giant), although his name was Calen. He was very knowledgeable, and entertaining.

We did the “Royal Route”, which starts at the Florianska Gate and works its way to Wawel Castle – as mentioned previously, this was the route taken by Polish kings as the preferred path to their coronations in the 14th through 16th centuries. But we also criss-crossed the old town, and headed to the Jewish quarter – called Kazimierz. We then walked a good stretch of the Vistula River as we circled our way back to the old town.

The photo gallery tells the story. But the feeling I had as I walked the old town and the surrounding sights was that of a deeply historic city, untouched by the horrific bombings and battles of the wars of the 19th century. The city was in impeccable order, clean, and well preserved. The crowds were there, but they too were orderly, and generally lacked the tourist density everywhere I walked. Krakow was the Poland of old, the ancient seat of the Polish Monarchy, the pride of the country, and having heard Calen describe it over a period of several hours, the most beautiful and important city in Poland. I could not have argued. Krakow was one of the most beautiful immersive traveling experiences I’ve ever had. I hope the photos do it some justice.

The scene is the central square, which is busy with both tourists and locals. Some of the nicer restaurants are on this square, so it draws a lot of attention. Beyond the people congestion – there are horses. Now with that in mind, notice how neat and tidy the area is. Remember, there are horses here.

“Fire and sword.” Boneless pork knuckle, baby back ribs, fire roasted potato, and cabbage. Wow. What a meal. The ribs were fall off the bone tender, seasoned with garlic. No American style rib sauce. Finger licking good. The boneless pork knuckle was the center of attraction. Crisp on the outside, gooey, fatty, meaty on the inside. Best I’ve ever had. In addition to the high quality of the food, the service was superior. A great intro to the Krakow food scene. I would highly recommend this fine place.

This restaurant changes their menu monthly to keep their offerings fresh. Slow cooked bacon over radish slices. Baltic salmon, Zander (Baltic perch-pike caught regionally) with white and green asparagus, and a pesto style foundation. The salmon was beautifully presented, arranged as a rose, with very mild radish garnish, crispy, crunchy with no bite at all. That was very flavorful, and sliced rather thick to deliver more flavor per bite. The stuff that looked like black caviar was a garnish mix of black olives, browned bread, almonds, and olive oil. It added an unexpected dimension of flavor to the plate. The Zander main course was also well presented, with a combination of ingredients that worked together very well. Someone knows what they’re doing in this kitchen. Service was a bit slow, but impeccable . This was memorable.

Beef and pork Pierogi, Polish cuisine sampler, with white and dark sausage, cabbage roll, 3 types of pierogi, potato pancake with goulash, and cabbage. The dark sausage had a bland grain filling – not a highlight. The potato pancake was very crisp, with the spicy goulash was a contrast. The white sausage had a bit of thyme to add some flavor, but was not a standout. The beef and pork pierogi were crispy and meaty, but rather neutral otherwise. The entire meal was rather middle of the road.

Miodova – in the Jewish quarter

Pink Matias herring with beets caviar served with red onion, cherries, pan fried halibut with broad bean and pea purée, perch filet with young cabbage and sour cucumber foam. The herring was delightfully fishy and tangy. The cherries turned out to be beet hearts, and the caviar too were tiny beet jewels. The halibut was cooked well with crispy skin and flaky white meat. The pea and bean purée was not to my liking, the flavor combination wasn’t working. The perch was cooked well with crispy skin and flaky white fish. The young cabbage worked well in combination with the fish. The service was really slow which detracted from the experience.

Steak tartare, roast wild boar, veal pirogi, mixed green salad. The tartare came with sardines, dill pickle relish, chopped onion, pickled mushroom, a dab of butter, and a tiny quail egg. Really good combination of flavors, and different than any steak tartare I’ve previously had anywhere. Great appetizer. The roasted wild boar came in a mushroom sauce, very mild. No hint of gamey flavor, to my disappointment – tasted more like roast beef. Good but unexpected. The veal pirogis were simple, just filled with ground veal, and the dumpling pastry rolled out very thin, a light affair with a drizzle of olive oil. Hot apple pie with ice cream and a chocolate mousse for dessert. The service was fabulous. This place is memorable.

Reflections on Kraków. I was sad to leave Kraków, even though I knew I had half the Western Slavic Countries itinerary in front of me. I wanted to stay and linger longer. I concluded that I could live in Kraków for a season, if not a year. Beautiful people, extremely gracious hosts, wonderfully good food, and drink. Architecture and history that spans the centuries, in the heart of Poland. This was a very immersive experience, and a memorable destination.