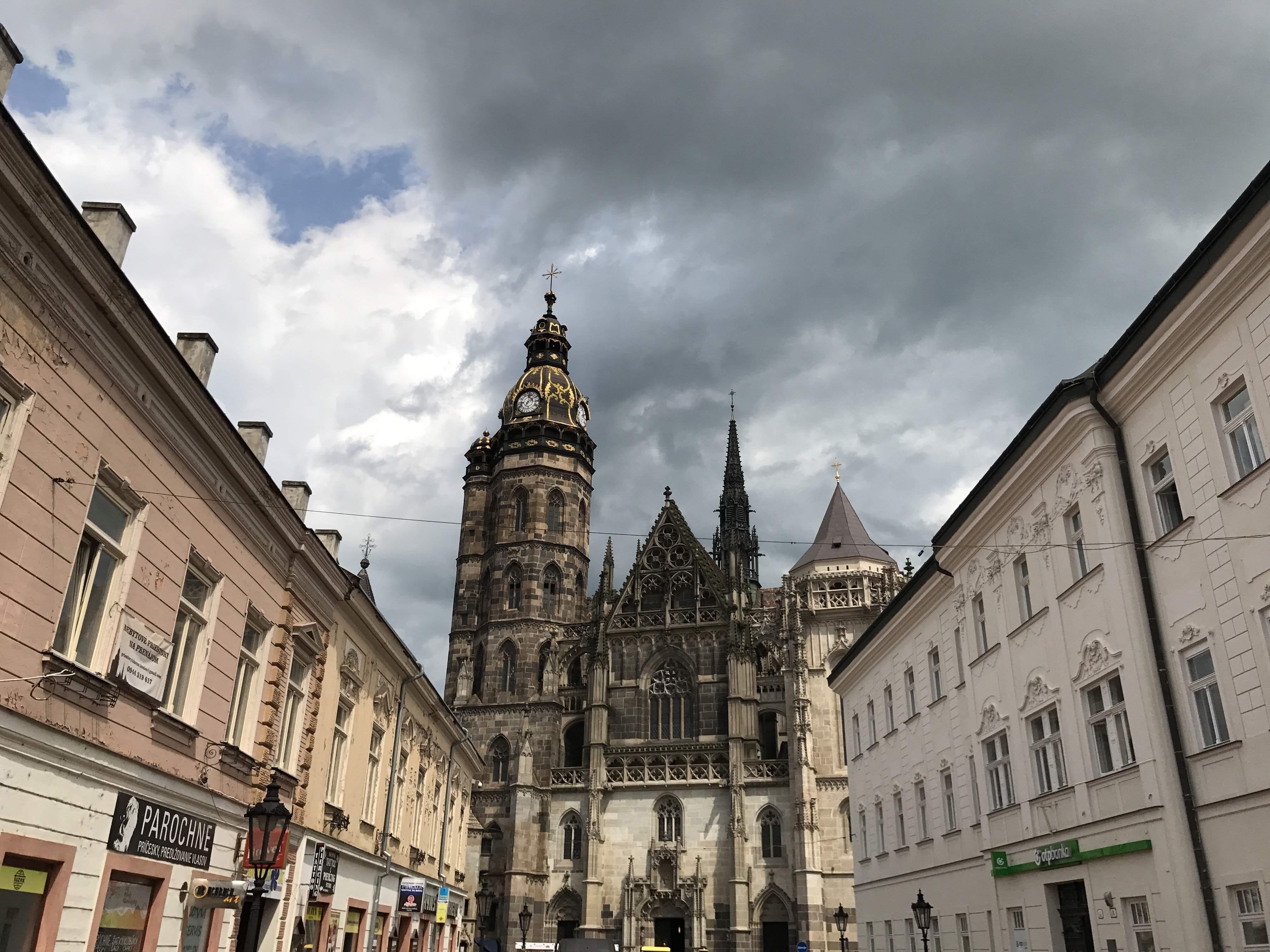 This is the second destination of 6 on the Western Slavic Countries itinerary as described in that post.

We got a late start out of Bratislava because of two reasons: It was apparently our Uber driver’s first time picking up a customer. He drove by us several times and after the third time I had to actually chase him down on foot leaving the luggage with my wife. Had it not been for that, we might still be waiting there. The second reason was that we were picking up our vehicle at a Sixt satellite office in the city. They were expecting us at noon but we showed up just before 10:30. This location was used by appointment only, and was not otherwise staffed, so we had to wait. There was a happy ending, as they upgraded me to a BMW 5 series with the M package.

We had a fabulous drive to Ruzomberok, our stop-over point en route to Košice. We stopped for lunch at at Salas Krajinka, a working sheep farm that had a restaurant on the property. Very interesting combination. However, the food was pretty good and the scenery was unexpected. The place was packed with people, as it turns out this is a restaurant that is sought out by people driving from Bratislava eastward as a stop-over, and it was well patronized. Lots of details on the experience at the restaurant in the food scene section.

We had driven some beautiful undulating landscape with the Tatra mountains as a backdrop. On the road we could see the remnants of the post communist era construction visible as we approached villages and towns of any size. These old communist era construction apartment blocks – gray, unadorned, very basic, were modern-day eyesores. I thought that as I drove further east and away from Bratislava that I would see less and less of them, but this didn’t turn out to be the case. As we approached Košice, we noticed the eyesores again. Apparently, they are ubiquitous in the Slovak Republic. So, as we entered the city and worked our way towards our apartment, we traveled into the center of town and the landscape changed dramatically. We found a beautiful old part of town with interesting and well preserved architecture, where the pace and the scenery were different than the outskirts.

Our apartment was in exceptional condition. Everything was new, well decorated, and in the very central part of this very small old town. The old town looked like it could have been walked completely end to end, and probably hit every every cross street, in under an hour.

This particular apartment rental was done through Airbnb which is not typical for me. For reasons discussed previously, in a blog that I’ll eventually post separately, I don’t often book through Airbnb. However this was the best option and I knew exactly what I was getting, which is the main issue with Airbnb. They don’t allow you to do a Street View. They don’t allow you to see the physical location of the apartment. The lack of transparency on location is unacceptable, because location is such a significant ingredient in the formula for having an immersive experience. Our hostess met us and showed us around the apartment, gave restaurant, and sightseeing recommendations, and helped us to get settled in. We had a stroll around town just stretching our legs after the long drive. We eventually found an interesting place to have a non-lumberjack meal. The Slovak cuisine is highly focused on meat and very hearty at that. So our second seafood meal of the trip was very welcome. Way more detail on this fabulous restaurant can be found in the Food Scene section below

Košice Stare Mesto should be properly called the pastel old town. The buildings were varied pastel colors throughout the old town, by design, and with a consistent architectural approach. It appealed to the eye. It was a lovely little town to stroll around at a relaxed pace. There was a delightful park that was placed down the center of  town. It was filled with flowers, grass, trees, monuments, fountains where children splashed, and an abundance of park benches where mothers sat watching their children play while others enjoyed their ice cream in the warm sunshine. It was an idyllic scene and epitomized the slower pace of life there. The city was mostly locals with a light tourist presence, which made it seem custom ordered for an off the beaten path immersive experience. I had a great couple of days in Košice, with the car remaining parked the entire time, and all exploration accomplished on foot.

Chicken noodle soup with meat and veggies (just like mom’s), sauerkraut soup with pork sausage, potato Perogies with bacon and sheep cheese on the side, sheepshank with grilled onion and green beans, potato dumplings with cabbage. The lamb shank was fall off the bone tender, served in a light brown gravy – neutral tasting. The potato dumplings were well spiced with sweet paprika, so much that it looked like a light tomato sauce, and they snuck in another round little pepper, red this time, that laid waste to my taste buds. The pirogies were tender with a mild flavor, surprisingly, and the sheep cheese not as strong and salty like what we tried in Bratislava. The bacon, however was on the salty side, and very smokey – complementary combination of flavors. All very filling, like lumberjack food.

Carpaccio of Octopus with aioli and sepia mayo, grilled sea bream, grilled calamari, spinach mashed potatoes and spicy tomato sauce. The bream was grilled to perfection with crispy skin, and moist, flaky flesh. The carpaccio had a delicate flavor, and the sepia infused mayonnaise gave it just a little kick. The grilled calamari was tender, over a fresh tangy tomato sauce – but not spicy as advertised. Everything was very fresh and well prepared. Service was excellent. And what great value at 26 euro all in.

Peasant’s Dream – pork, chicken, sausage, bacon, mustard, horseradish, and chilis, French fries, cucumber salad. Classic traditional Slovak fare, and nobody speaks English. Can’t get any more local. We popped in to escape the sudden downpour and decided to give it a try for lunch. We were encouraged by the lack of English.

Seafood soup, grilled sea bass, fillet of cod baked in paper, green salad. We really wanted to eat light, and also wanted seafood. There are few choices in town, and we knew the quality here was great from our earlier experience. The cod was tender and flaky. Not a large portion, but a good combination of ingredients, and very tasty. The sea bass was just a tad over-grilled, very crispy on the outside, but because it’s less oily than most fish, it can dry out easier as well. Still good, though – and I’m a tough grader.

Reflections on Košice. A beautiful, charming, and very compact old town – much less touristed than most parts of Europe I’ve visited. I spent a very enjoyable 2 days relaxing, and being a local. This was a very immersive experience, and a memorable destination.