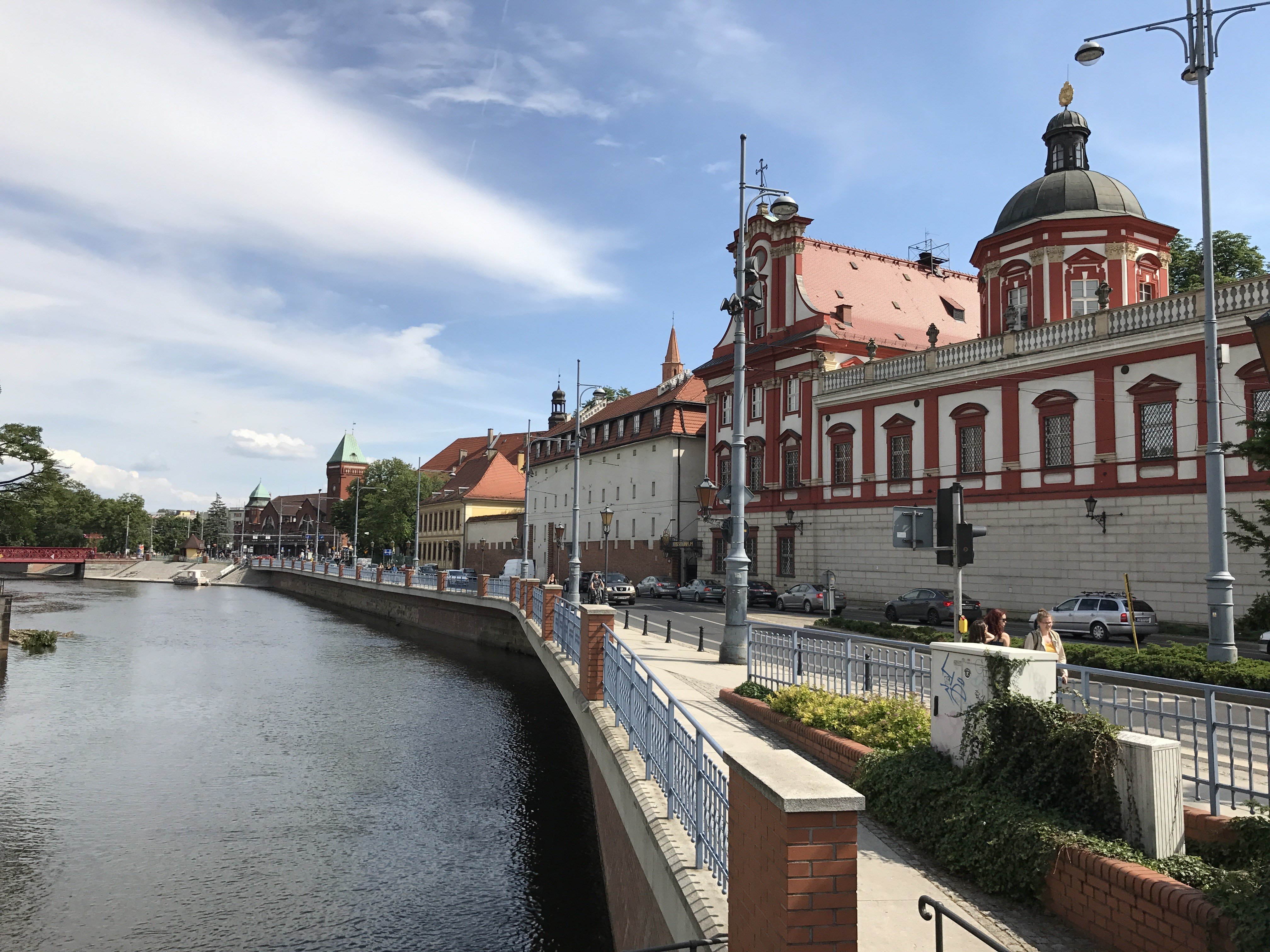 This is the 4th destination in the Western Slavic Countries circuit as described in that Travel Planning post.

We drove through green, rolling countryside on tree lined roads with a backdrop of beautiful blue skies, on a  sunny day. It was mostly two lane roads but they were very well-maintained and traffic was not particularly dense as it was Sunday morning. We drove through little town after little town, all of them very well-maintained and they looked upscale as compared to what we’d seen in Slovakia. Poland was definitely a rung up on the economic ladder as compared to the Slovak Republic.

En route to Wroclaw, we made a stop in Wadowice to visit the museum and family home of Pope John Paul II,  and to explore the town around its main square. Wadowice is a relatively small town with a Central Square that, like a magnet, held all of the interesting parts of town hovering near it – the rest of the town was unremarkable. The museum to Pope John Paul II was next to the main church in the central square. Wadowice looked like all the little towns we passed through on the way. It looked clean, orderly and well-maintained , resembling Austrian or German villages in that regard.

As we left Wadowice, the countryside turned from rolling and hilly – reminiscent of West Virginia or southeastern Ohio, and eventually blended into a more flat landscape, with a steady array of farms. Beautiful, pastoral, green countryside rolled out in front of us, mile after mile, adding to the pleasure of the drive. The sight-seeing eye candy on our 2 lane road was interrupted every 10 minutes or so, as we passed through the next quaint little town. Southern Poland was lovely.

As we arrived into Wroclaw, I noticed that the the city was different than Kraków. Kraków was spotlessly clean, not only in the old part of town but everywhere we wandered through. Wroclaw as a bit scruffy as compared to Krakow, which is more of a commentary on how spotlessly clean Krakow was, rather than anything negative about Wroclaw.

We found a secure parking lot within a five minute walk of the apartment and dropped off our rental car there. On arrival to the apartment, it wasn’t exactly as represented on Booking.com. The apartment looked like it clearly needed some maintenance, and there were things that didn’t function properly. I was willing to tolerate this inconvenience because of the unbelievable location of the apartment, and it’s proximity to the old town.

We dropped off our luggage and went about some initial exploration with the idea of finding a place to eat, and stretching our legs after a long day driving. As it turned out, it started to rain, and we ducked into a restaurant within walking distance before we got too wet. The restaurant – Karczma Lwowska – turned out to be really good, an excellent introduction to Wroclaw. It rained very hard for the next two hours as we enjoyed one of the finer meals we had in Poland. Details in the Food Scene section.

The following morning, as we were preparing for our main day of exploration in Wroclaw, the electricity went out at the apartment, and I notified our host immediately of the issue. We were advised that it would take a couple of hours to repair, so we went about our discovery trek. The electrical problem turned out to be an all day affair, and they were never able to restore power. We had to relocate to a different apartment. The secondary apartment was not in the old part of town, and  required a 20 minute walk to get back to it. We were very disappointed; it goes to show that no matter how well planned the trip, things go wrong, and you’ve got to roll with the punches.

Unlike Krakow’s unscathed survival of the wars of the 20th century, Wroclaw (while it was still the German city of Breslau) as devastated at the end of WWII.  Half of its medieval old town was in ruins, which fared better than the outskirts of the city which were leveled to the ground. The city was among the last to fall during WWII in a bloody siege where tens of thousands lost their lives in defense of the city. Breslau became Wroclaw as the Germans ceded the territory to Poland as part of the post war agreements at the Potsdam Conference. The Poles flowed in following the German exodus.

But the city recovered. The photos will tell the story. The trauma of the 20th century yielded to reconstruction and a grand population inflow post WWII. Wroclaw flourished in spite of the constraints of the Communist era, and bloomed in the the 21st century.  It was hard to imagine that the 20th century destruction ever occurred based on casual observation from walking around the city. Beautifully restored, with the old town along the river, flowing through a half dozen enchanting islands on the Oder River.

The Poles call them “Krasnoludek”, or dwarves – to me they’re gnomes. And there are hundreds of them scattered throughout the city. This all started with a single statue to honor a group called the Orange Alternative, a counter-Communism group from Poland’s struggle through the end of the Communist era. Since 2001 when that first statue was erected, tiny – about the size of a human hand – statues have appeared all over the city. They are cute, impish and mischievous looking little things that spring around any given corner. It added to the delight of this lovely city.

The restaurant is on the main square with great views to the cathedral and just of the square itself. The service is professional with the waiter making suggestions and adjustments to your order as necessary. We ordered herring with onion and beets in cream sauce, grilled Polish kielbasa, fried cabbage, grilled mushrooms. The kielbasa was grilled to perfection, served with zingy horseradish and a mild mustard. The fried cabbage turned out be more of a casserole with a creamy dill sauce. I liked it, it went well with the meal. The green salad was enormous and could have easily served 4, with fresh ingredients. For dessert, traditional wafers filled with chocolate and walnuts. It was very light, with more of a hint of chocolate instead of chocolate as the core. We were offered honey vodka with a touch of orange as a digestif.

Pate stuffed with mushrooms, chicken soup, duck, rabbit, fried mushrooms with garlic and green salad. The soup was served extremely hot and tasted as if it were a vegetable broth instead of chicken broth – it was very good. The pate was very dense, served with a cranberry sauce and bread. It was rich, but not creamy like what I’m used to from France, for example. The cranberry sauce added an interesting contrast. The duck was served as two legs and thighs, fall off the bone tender. The duck came with sliced fried potato and cranberry sauce. The grilled mushrooms were not actually grilled, kind of soft, as if stewed. Not bad, but not as advertised on the menu. The rabbit was very tender, and not in the least gamey – the tastes-like-chicken standard applies.

The immersive experience in Wroclaw was made difficult by the antics of our apartment rental team. This was a corporate rental, named Penguin Apartments, that likely specialized more in hostels than in apartments. But the city was truly remarkable, with a long history spanning to the 10th century when the first Slavic tribes settled into the city’s current location on the Oder River. The city developed character from all of the hands that it has passed between over the centuries – a long list that includes, Bohemians, Prussians, Poles, and Hapsburgs. Wroclaw was a beautiful discovery experience.